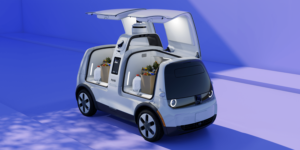 US start-up Nuro has unveiled the third generation of its self-driving electric vehicle, which the company says is now ready for series production. Nuro is cooperating with BYD North America to produce the electric delivery vehicles.

BYD will assemble the hardware components of the platform at its plant in Lancaster, California, before the vehicles are completed by Nuro at its production facility in southern Nevada. The collaboration was announced back in the summer. However, it is not clear from the current announcement when exactly production is to start.

Nuro had already presented the first generation in 2018 and started a field trial in Houston in 2020 with the second generation of the autonomous delivery vehicle. The third generation now on display, simply called Nuro, has an improved electric drive system compared to the Nuro R2, among other things: the top speed is now 72 km/h instead of 40 km/h previously. This should enable the vehicle to drive on larger main roads and thus reach more customers – the utility value for the operator increases “drastically”.

There are some minor changes to the appearance: The vehicle is somewhat slimmer, the sensors have been better integrated into the front. However, the lidar sensor on the roof of the vehicle remains. An important new feature: if a collision with a passer-by does occur, the Nuro now has an external airbag to soften the impact.

In the interior of the small electric delivery van, the load volume has been increased to up to 765 litres – probably also as a result of the practical test in Houston. This means the vehicle can transport up to 2227 kilograms of cargo. According to the company, a Nuro can deliver up to 24 shopping bags, which the customer then removes from one of the flaps. Alternatively, cooling or heating modules can be used – to deliver frozen food at -5.6 degrees, for example, or to keep hot food at around 46 degrees. One of Nuro’s partners is the US pizza chain Domino’s.