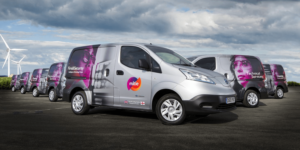 The British facility service provider Mitie has reached the target of converting 30 per cent of its fleet to electric vehicles three months earlier than planned. As a result, the target has now been raised to 35 per cent by the end of March 2022.

More than 2,000 purely electric vehicles are currently in operation for Mitie so far, divided among 15 different models. These include some passenger cars, vans (in 2021 Mitie ordered 655 Vivaro-e from Vauxhall) and also an electrically powered gritter. The company says it has installed thousands of charging points at customers’ and employees’ homes for the use of these vehicles.

“Switching 30 per cent of our fleet to electric by the end of March 2022 was already an ambitious target, so to have hit this milestone three months ahead of schedule is an incredible achievement and testament to the hard work of the Mitie Fleet Team,” says Peter Dickinson, Chief of Staff at Mitie.

But even 35 per cent is only an interim target: the facilities service provider joined the Climate Group’s EV100 initiative in July 2019. This means that Mitie has committed to electrifying its entire vehicle fleet by 2030.

US Postal Service (USPS) wants $3.3Bn to electrify the fleet