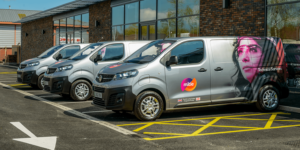 The British facility service provider Mitie has ordered 655 Vivaro-e from Vauxhall. The first example of this large order has already been handed over to Mitie and is already the 1,000th electric vehicle in the company’s fleet.

For this order, Mitie chose the 75 kWh version of the electric van in two wheelbase variants (L1 and L2). Vauxhall does not offer the smallest body version with a length of 4.60 metres. In the Opel Vivaro-e available in Germany, this version is designated as “S”. At Vauxhall, however, the “M” version with an overall length of 4.96 metres is the shortest body variant available. This means that the optional 75 kWh battery can be ordered from Vauxhall in the L1 version, which is not available in the Opel Vivaro-e L1 – the 4.60 metre model is only offered with 50 kWh.

This has no effect on the drive itself and the familiar 100 kW motor on the front axle is still the same one provided by Vitesco Technologies. The range according to the WLTP standard is given as 330 kilometres – regardless of whether it is the 4.96-metre model or the L2 version with 5.31 metres.

In practice, the range is likely to be somewhat less. Since the vehicles are used by Mitie technicians and engineers, they have a special conversion in the cargo area. The equipment and tools required for the work naturally increase the weight and thus the power consumption. Whereas Vauxhall points out that the conversion has been done to keep the weight as low as possible to maximise range.


Simon King, Director of Sustainability and Social Value, Mitie, said that 18 months ago, when Mitie made a pledge with the Climate Group initiative EV100 to decarbonise their fleet, the company thought switching their larger vans would be one of their biggest challenges. Now with the Vauxhall electric vans in this latest order set to join the Mitie fleet this year, the company expects to reach their target of 2,021 EVs in 2021.

This is not the first major order for the Vivaro-e in the UK. In February this year, British energy supply company Centrica ordered 2,000 additional Vivaro-e from Vauxhall for its subsidiary British Gas to make a total of 3,000 of the electric vans to be in operation by next year.

In August last year, Vauxhall announced an order from Openreach, one of the UK’s largest fleet operators, for 270 Vivaro-e and nine Corsa-e. Openreach is the broadband and telephone network subsidiary of the telecommunications group BT. The parent company BT Group joined the EV100 initiative in December 2018.

Mitie joined the Climate Group’s EV100 initiative in 2019. The EV100 annual report was released in February this year, which we discussed in an interview  with the head of EV100, Sandra Rolling. The EV100 report reveals a continuing lack of available zero-emission commercial vehicles, but also a massive upsurge in the electrification of fleets in the UK.