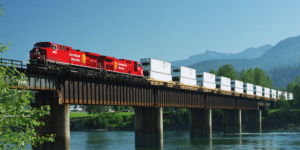 Ballard Power Systems has received an order for eight additional 200 kW fuel cell modules to support the expansion of Canadian Pacific’s Hydrogen Locomotive Program from one to three locomotives, with expected delivery in 2022.

Including Ballard’s announcement from March 2021, the company will now provide a total of 14 fuel cell modules to Canadian Pacific, with each module with a rated power output of 200 kW. The project picked up significant steam in November 2021, when a $15 million grant was made available to Canadian Pacific through Emissions Reduction Alberta.

This order expansion by 8 additional fuel cell modules also showcases how much the project has grown in scope in the last months – initially only a concept vehicle was to be built, which has now been expanded to encompass three fuel cell locomotives.

“We are excited to deepen our collaboration with CP and accelerate the energy transition,” said Randy MacEwen, Ballard’s President & CEO. “The expansion of CP’s Hydrogen Locomotive Program is illustrative of the confidence in Ballard’s fuel cell technology and the important role hydrogen fuel cells will play in decarbonizing heavy-duty motive applications, such as freight locomotives.”

Should the project prove successful, the initiators plan to scale the project even further: “The project will help scale up technology and bring down the costs of deploying hydrogen to address the critical challenge of decarbonizing the long haul, heavy-freight sector,” said Steve MacDonald, CEO of ERA.