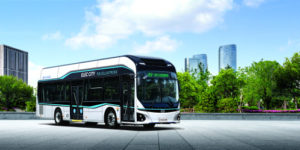 In South Korea, a total of 624 hydrogen buses are to be put on the roads of the port cities of Busan and Ulsan and the province of South Gyeongsang by 2025 as a replacement for buses with combustion engines.

The country’s Ministry of the Environment has signed a cooperation agreement to this effect with the cities and the province mentioned as well as Hyundai. Aju Business Daily writes that about 300 million won (222,000 euros) in subsidies is being provided for each vehicle.

An electric intercity bus with a fuel cell will also be tested whereby the Ministry of Environment and Hyundai aim to collect data on the NVH (noise, vibration, harshness), economy and performance of the bus through the test operation. Such a FC intercity bus was first mentioned in a report last July when Hyundai announced it would be making the Universal coach in a hydrogen fuel cell version.

Industry in S.Korea is ramping up its fuel cell capacities. Hyundai has been pushing the fuel cell vehicle drive in commercial vehicles and, for example, just last month, Plug Power and SK Group’s SK E&S division formed their joint venture announced earlier this year to provide fuel cell systems, hydrogen fueling stations and electrolyzers to the Korean and other Asian markets. Also in October just passed, Hyundai Mobis, the South Korean automotive supplier belonging to the Hyundai Motor Group, has announced that it will invest about 1.3 trillion won (equivalent to about 950 million euros) in the construction of two plants for fuel cell systems in the Korean cities of Incheon and Ulsan.