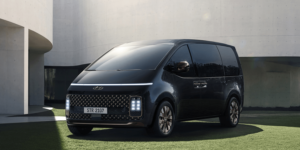 Hyundai plans to double its range of fuel cell vehicles from currently three to six within two years, according to a South Korean media report. Hyundai currently offers the Nexo car model, the Elec City Fuel Cell bus and the Xcient truck with fuel cells.

This was reported by Korea IT News with reference to industry circles. By 2023, fuel cell versions of the Universe coach, the Solati van (known locally as the H350) and the Staria van announced in April are also planned. According to the report, the manufacturer wants to double their fuel cell vehicle lineup with the additional models and expand its position as the global market leader for precisely these fuel cell vehicles. However, the Hyundai Motor Group has not confirmed the information.

The Staria is a 5.25-metre-long van with a futuristic design that, depending on the configuration, will offer space for seven to eleven seats – from lounge-like single seats to three bench seats in the rear like in a minibus. A commercial vehicle variant is also to follow, with a load volume of up to 5,000 litres possible.

The Solati is a much larger van, which offers 15 or 16 seats in the minibus variant. It is not confirmed whether Hyundai is going into the van sector or the minibus business with the FC variants of the two vans – the report in Korea IT News, however, emphasises the number of seats. Above the two vans, the express intercity bus Universe is to come with fuel cell propulsion. So far, the Universe is offered with two Euro 6 diesel engines or three different CNG engines.

While no possible key data of the drive system for the Staria and Solati have been mentioned yet (it is only hinted that an improved version of the 113 kW fuel cell of the Nexo could be used), there is a more concrete statement about the Universe: It is supposed to take over large parts of the drive system from the Elec City Fuel Cell Bus. The fuel cell system has an output of 180 kW, the hydrogen is stored in an 845-litre tank. In addition, the drive has a 78.4 kWh battery. For the bus, however, a larger battery is to be installed in order to increase the range.

In addition, Korea IT News writes that the second generation of the Nexo could also come onto the market in 2023. Hyundai has been offering the fuel cell SUV since 2018. According to WLTP, the 4.67-metre-long model has a range of 666 kilometres.

The fact that the three aforementioned models and the new edition of the Nexo are all scheduled for market launch in 2023 is reportedly not due to Hyundai’s development capacity. According to the report, the Koreans want to use the time until then to build up a sufficient network of filling stations.

In the battery electric vehicle sector, Hyundai is aiming to triple its sales by 2025. “This year, we plan to sell 160,000 EVs spanning eight different models, including the Genesis EV. We aim to expand the line-up to 12 models and sell 560,000 EVs by 2025,” said Kim Tae-yeon, vice president and head of EV business strategy at Hyundai Motor. Hyundai is also working with partners on optimised lithium-ion batteries for its e-cars. With a view to future solid-state batteries, Hyundai is initially aiming for a production test run in 2025 to work towards series production in 2030.