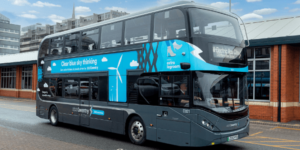 National Express Coventry has ordered 130 electric double-decker buses to enter service in Coventry by early 2023. The order follows the city’s targets to go 100% electric by 2025. At present, charging infrastructure is being built at the depots and Pool Meadow bus station.

In their communications, neither National Express nor the West Midlands Combined Authority (WMCA) specifies whom they have ordered the buses from. They only state that the new double-deckers will be made in Britain – a prerequisite to receive zero-emission bus funding. This means either BYD-ADL, Wrightbus or Switch Mobility (formerly Optare) will build the e-buses.

National Express already has ten electric double-deckers in its Coventry fleet; the press images show ADL-BYD Enviro400EVs painted grey-blue. However, the operator or manufacturers have yet to confirm whether the current significant order has also gone to the British-Chinese consortium.

The order is part of Coventry’s plan to put around 300 electric buses on the roads by 2025, converting its entire fleet to electric. National Express does not specify when it will order the remaining e-buses. The statement only says it plans to order more buses “at a later date.”

Last year Transport for West Midlands (TfWM), part of the West Midlands Combined Authority (WMCA), secured £50 million funding from the Department of Transport to ensure every bus in Coventry is zero-emission.

David Bradford, managing director of National Express Bus, is pleased with deploying the ten e-buses so far. “Ten of our existing electric double-decker buses have already driven over 850,000 miles and saved 1,400 tonnes of carbon dioxide,” he said. In winter, the range is 220 kilometres; in summer, 280 kilometres are possible. The charging takes four hours.