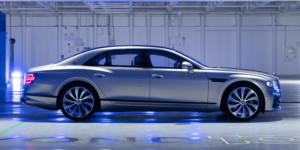 Bentley is finally making the switch with their latest decision to transform into an all-electric premium carmaker over the next ten years. The Volkswagen brand presents the transition as part of the ‘Beyond100’ strategy.

As early as 2026, Bentley intends to offer nothing but purely battery electric vehicles and plug-in hybrids, and from 2030 will rely exclusively on BEVs. The move comes as a slight surprise in its refound decisiveness. Adrian Hallmark, Chairman and Chief Executive Officer of Bentley Motors, calls the strategy “a paradigm shift throughout our business, with credibility, authenticity, and integrity. Within a decade, Bentley will transform from a 100-year-old luxury car company to a new, sustainable, wholly ethical role model for luxury.”

About three years ago, Bentley had still considered plug-in hybrid vehicles enough of an answer to reducing their carbon footprint, which is among the highest in the industry due to their heavy sedans and SUVs. Only in 2018, the discussion had taken a measured turn to increasingly favour all-electric cars, also in line with the Volkswagen Group starting to push for electrification.

The movement has since taken up speed and Group CEO Herbert Diess is in the process of streamlining the portfolio. To concentrate fully on the change to electromobility, Diess wants to part with niche brands, as reported. The sales plans are most advanced at Bugatti, while talks with the Croatian start-up Rimac were nearing completion.

While VW does not appear wanting to sell Bentley, the Group sees the British premium brand closest to Audi, which, like Bentley, takes technological cues such as the PPE platform from Porsche. Bentley was added to the Group in 2018 under the leadership of Porsche CEO Oliver Blume. For a few days now, rumours have been saying that Volkswagen wants to place the Bentley brand under Audi management entirely from mid-2021. So once Bugatti is sold, and Bentley goes to Audi, Porsche would be alone in the Group’s luxury bracket.


The same report suggested that Audi’s flagship electric project Artemis will play an important role in Bentley’s electric course. Artemis could form the basis for a luxury e-SUV for the British brand. Audi reportedly deems it a Tesla fighter in line with an electric A9. Equipped with a new software platform and a range of 650 km, plans to develop offshoots for Porsche and Bentley based on the new Audi flagship had been part of the development from the start. Audi envisions launching in 2024.

This would fit Bentley’s schedule. Sales Director Chris Craft, already said in June 2019, the brand would offer hybrid versions of all its models by 2023 and launch its first all-electric model by 2025 at the latest. Bentley today confirmed said timeline. New was the promise that Bentley would “exclusively offer plug-in hybrid and electric models only within its range in 2026. By 2030, this will change to battery electric vehicles only.”

So far, Bently has the Bentayga as a plug-in hybrid in its lineup. The PHEV utilises an adapted drive train of the Porsche Panamera E-Hybrid with a 3.0-litre V6 petrol engine. The brand also announced two more PHEV for next year but remains vague when it comes to naming specific models.

For all-electric visions, the company has had no more than concepts so far, such as the EXP-100. And again, there may be the PPE from Porsche eventually supporting an electric Bentley.

At the same time, Bentley could add some of its own developments. In a research project scheduled to run for three years, the British company is developing an integrated e-axle, which is to do without rare earth magnets and aims to install “unique integration levels and revolutionary performance features”. Plans to integrate it in a model have yet to crystallise.

Bentley makes all its vehicles at their Crewe location in England’s North West. The ‘Beyond100’ strategy includes all operations to be climate positive after 2030. Bentley also committed to reducing factory environmental impact by 75 per cent by 2025 against a 2010 baseline.

Tesla Model Y made in China on the horizon