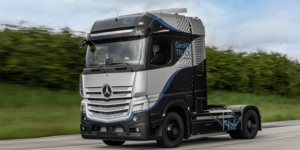 H2 Mobility Austria, a consortium of eleven Austrian companies, aims to put around 2,000 hydrogen trucks on the roads of the Alpine Republic by 2030. An accompanying study estimated the deployment would bring Austria an added value of 475 million euros.

Through the consortium, the partners commissioned the consulting firm Deloitte to prepare the study on hydrogen mobility focusing on trucks, the results of which have now been presented. Deloitte also calculated potential savings of 70 million litres of diesel for the 2,000 hydrogen fuel cell trucks.

Another finding: the battery-electric trucks already in use would not have the necessary load volume and/or range to take on all transport tasks. “Hydrogen trucks, on the other hand, can be used for trips with a longer range and thus represent an essential link between rail and road,” says Alexander Kainer, partner at Deloitte Austria. However, it is also worth bearing in mind who commissioned the study at this point.

According to the paper, the projected 475 million euros in value-added will be generated by producing green hydrogen in Austria and the necessary filling station infrastructure. According to Kainer, this could create between 3,000 and 4,000 jobs across the country by 2030.

In addition to the economic factors, Deloitte also highlights the positive environmental impact. According to Kainer, the 2,000 trucks with fuel cells instead of diesel per year could lead to a CO2 reduction of 24,000 tons and reduce particulate matter emissions by up to 50 per cent.

Specifically, the study envisages creating the prerequisites for 2022, i.e. initiating the procurement of the first vehicles and expanding the (existing) infrastructure. In the first phase, around 500 metric tons of green hydrogen are to be produced from 2023, which should be sufficient for about 65 vehicles at up to 100,000 kilometres per vehicle. Simultaneously, efforts to procure vehicles and expand filling stations will continue. From 2026, the ramp-up will take place in the second phase, when H2 trucks from Daimler Truck and Volvo, for example, will be available in series production, and up to 16,000 tons of green hydrogen will be produced in Austria for a nationwide filling station network.

For the study, Deloitte calculated a subsidy of 80 per cent of the additional costs for the vehicles and the necessary infrastructure – with the planned 2,000 trucks, this would be an extrapolated subsidy amount of 460 million euros. H2 Mobility Austria wants to create the appropriate framework conditions in the next two years “in cooperation with the government.” “Our neighbours in the DACH region are leading the way – Austria should now follow suit,” says Wolfram Senger-Weiss, Managing Director of the Gebrüder Weiss company. “We need to create the necessary conditions to build up the domestic infrastructure nationwide and expand a hydrogen truck fleet.”