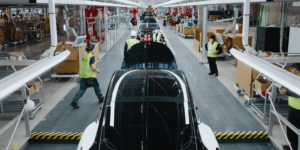 Tesla has bought an existing train track from the German regional railway company DRE to better connect to its plant in Grünheide. Tesla plans to run a shuttle train to Giga Berlin at shift change times until the new station is commissioned.

According to the Brandenburg Ministry for Infrastructure and Regional Planning, Tesla is responsible for the shuttle’s planning, construction, and operation, including the stop.

Plans see the shuttle train running between Erkner, a town outside Berlin, which is part of the city’s public transport network, i.e. Tesla employees based in Berlin may take the S-Bahn to get there before jumping on the Tesla shuttle. The new Tesla train will stop on the track south of the factory premises.

While operations had reportedly been delayed repeatedly, not the least due to German bureaucracy, Tesla now aims to start delivering Model Y cars made in Grünheide starting this March.

In today’s news, no timeline was given when the train stop would be completed. It is also unclear whether the train will run fully electric.

BMW i4 recall in the EU