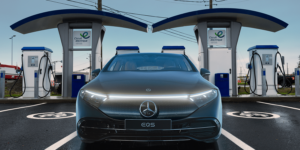 Daimler AG has renamed itself Mercedes-Benz Group AG as of 1 February 2022. With the renaming of Daimler, the company completes its realignment. However, the stake in Smart could soon decrease.

On 10 December 2021, Daimler Truck Holding AG had already been launched as an independent company on the Frankfurt Stock Exchange. Since then, the passenger car and van divisions had continued to operate under the name Daimler AG – but the renaming to Mercedes-Benz Group AG had already been announced earlier.

For Daimler, this is the fourth renaming in the past 25 years. The historical Daimler-Benz AG has since become DaimlerChrysler. After the failed attempt at a “marriage made in heaven”, Daimler AG was founded following the sale of Chrysler – which now becomes Mercedes-Benz Group after the spin-off of the truck and bus business. With the renaming, the stock exchange abbreviation changes from DAI to MBG.

“The renaming to Mercedes-Benz Group AG underlines our renewed strategic focus. In doing so, we want to make clear where we see the core of our company – building the most desirable cars in the world,” says Ola Källenius, who is now Chairman of the Board of Management of Mercedes-Benz Group AG. “The Mercedes star has always been a promise for the future: Changing the present in order to improve it. We want to continue this legacy of our founders by taking the lead in electric mobility and vehicle software.”

The new Mercedes-Benz Group will thus focus fully on passenger cars from the Mercedes-Benz, Mercedes-AMG, Mercedes-Maybach and Mercedes-EQ brands, as well as vans. Smart, interestingly, is no longer mentioned in the listing of brands. This suggests that Smart could be transferred to the Smart Automobile Company with the change of name, the joint venture in China founded by Mercedes-Benz and Geely at the beginning of 2020.

A preview of the first model of the new Smart era, due to be launched in 2022, was given at the IAA Mobility in September 2021 with the Smart Concept #1. Currently, Smart only offers the Smart EQ Fortwo and its convertible version, after the EQ Forfour was removed from the range at the end of 2021.

Bloomberg is currently reporting that the Smart Automobile Company wants to raise money for the reorientation of the Smart brand as a Chinese electric car manufacturer with a share sale. According to the report, Smart could raise between half a billion and a billion US dollars in this way.