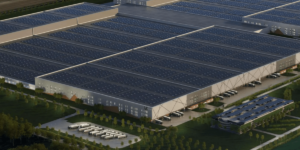 The French battery company Verkor will build its first battery cell factory in the northern French port city of Dunkerque on the border with Belgium. Production is scheduled to start in 2025.

Construction of the factory is scheduled to begin in 2023, according to Verkor. A capacity of 16 GWh is planned for the start of production in 2025. Shortly after commissioning, construction work will continue: the plant is to be expanded to 50 GWh by 2030.

“The site meets all the requirements for a Gigafactory in terms of land, logistics, energy capacity, proximity to customers, access to a qualified workforce, and scalability,” the company wrote. “Up to 1,200 direct jobs and more than 3,000 indirect jobs are expected to be generated during the first phase of the project.”

Research and development will continue to be based in Grenoble. The construction of the Verkor Innovation Centre (VIC) is also currently underway there, where, among other things, the pilot lines will prepare for series production from 2025.

The battery cells will primarily be supplied to Renault Group, which, entered into a strategic partnership with Verkor last summer. Against this background, the location of the battery plant in northern France is also well-chosen: Dunkerque is just over 100 kilometres away from Renault’s eMobility industry cluster Electricity around the Douai, Maubeuge and Ruitz plants. As AESC Verkor will also build a battery factory in Douai to supply Renault, suppliers will probably also locate in the region.

According to the announcement made in the summer, Renault intends to purchase ten GWh from Verkor from 2026, then 20 GWh from 2030. Renault and Verkor want to jointly develop and manufacture high-performance batteries for Renault electric cars from the C-segment upwards and for Alpine models. The Verkor cells could therefore be used in performance variants of the Mégane E-Tech Electric built in Douai or in Alpine models.

The Renault Group sports car brand had announced this week that it would build an electric crossover model called the ‘GT X-One’ at its Dieppe plant from 2025. The start of production would also fit with the planned start-up of Verkor in Dunkerque. Like Dunkerque, the Dieppe plant is located on the coast of the English Channel, but some 200 kilometres to the west.

With the Dunkerque plant now confirmed, the plans of the start-up, founded in 2019, have changed significantly. In mid-2020, Verkor announced that it was planning to build a cell factory in 2022 with the support of EIT InnoEnergy, Schneider Electric and Groupe IDEC. According to information at the time, the focus of the search for a location was to be on the south of France. The deal with Renault has apparently led to a new plan.