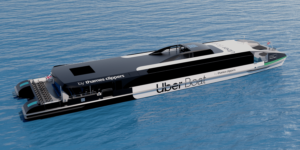 Thames Clippers is building the UK’s first hybrid high-speed passenger ferries, set to launch in autumn 2022 and spring 2023. The service is part of ‘Uber Boat’ and will function as a public transport network across the Thames river.

The hybrid design allows the hybrid-electric vessels under construction at Wight Shipyard on the Isle of Wight to operate solely on battery power while transporting commuters and sightseers through the British capital. The hybrid boats will be active throughout the ‘Central Zone’, between Tower and Battersea Power Station piers, and recharge while using bio-fuelled power outside central London.

An aspect that the company mentions as advantageous is that the technology is not reliant on shore-based charging. Instead, the new boats will use excess power from the engines to recharge their batteries for the central London stretch.

“This development in technology has enabled us to take the first major steps to meet our future environmental vision,” said Sean Collins, Uber Boat by Thames Clippers’ co-founder and CEO. “For over 20 years, we have been at the forefront of innovation for the river marine sector. We are committed to supporting the sustainable growth, infrastructure and economic development on and around the river to endorse the river’s importance to London as a form of transport.”

Thames Clippers has currently branded its river bus services Uber Boats due to a sponsorship agreement with Uber made in July 2020. Their services run on the river Thames between eastern and Central London and include tourist services under licence from London River Services. What is more, Thames Clippers operate under licence from Transport for London (TfL) which has continued to integrate the boats into its tube and bus ticketing network. From November 2009, Thames Clippers services started to accept Oyster pay as you go (and contactless payments) on all of its services.

Danfoss Editron will supply the complete high-voltage DC distribution and control system as well as motors and inverters for the vessels. The two 40-metre-long hybrid-electric vessels will be built by Wight Shipyard Co on the Isle of Wight.

“Cities and countries are increasingly turning to electrification solutions for their near-coastal vessels, not only to reduce CO2 emissions, but also to increase operational efficiency,” said Erno Tenhunen, Danfoss’ Editron division’s Marine director, adding: “The global potential for this electric conversion is also supported by technological innovations and a steady decrease in battery prices, enabling projects to achieve attractive payback times for ferry owners.”

Additional information has been revealed about the source of the hybrid drive: the parallel hybrid transmissions PHT and a full hybrid electric solution package (HESP) were delivered by the Belgian drive specialists from Esco Power. An Esco Power spokesperson added: “In our HESP system we use Danfoss inverters and E-machines as components for this project. We are delighted to be part of the first hybrid fast ferries on the river Thames.”