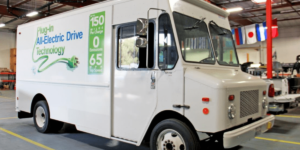 US Hybrid, an Ideanomics subsidiary, has announced an order from Antelope Valley Transit Authority (AVTA). The transit agency expects US Hybrid to deliver 19 battery-electric vans for public transportation, but the vehicles must first undergo advanced testing.

Said testing at the Altoona test track is required by the Federal Transit Administration (FTA) to be eligible for federal funding. US Hybrid did not disclose the order value.

The battery-electric vans will be powered by US Hybrid’s powertrain with an estimated range of 220 miles per charge. They are also compatible with DC fast-charging currently used by AVTA. US Hybrid stresses that the vans support two wheelchairs with options for export power and V2V DC-fast charge, which supplies 80kW. The company added that it had delivered the same van configuration powered by hydrogen instead of a larger battery pack to other transit agencies in the past.

At AVTA, the vans on order with US Hybrid will be added to the agency’s dial-a-ride and demand response community.

It is also not the first time AVTA has turned to an Ideanomics company. In 2017, AVTA started working with WAVE, another subsidiary of Ideanomics, to implement high-power wireless charging pads both in-route and bus depot. As a result, the agency claims it now powers the largest electric bus fleet in the US with 65 zero-emission vehicles.

“We have started to see examples of synergistic values among different operating companies within the Ideanomics family,” said Robin Mackie, President of Ideanomics Mobility. “It validates our vision and gives us the confidence to continue building the most complete electrification solutions on the market to accelerate commercial electrification.”

US postal fleet “could” be 70% electric within a decade