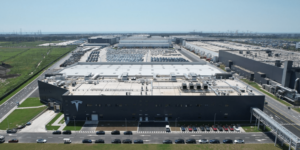 The production capacity of the Tesla factory in Shanghai is to be increased to over one million vehicles per year in the coming years. Currently, one expansion stage is already underway. Should the target actually reach seven figures, further expansion work is likely to follow.

This is reported by Chinese media with reference to insiders. The plant’s current capacity is stated by Tesla at over 450,000 vehicles per year, most recently confirmed in the annual report for 2021 published at the end of January. Now the local medium Cailan quotes an insider as saying that the annual production capacity of Giga Shanghai is expected to exceed one million units in the next few years.

While such insider figures should be taken with a grain of salt, it is clear that an expansion is already underway. In December 2021, Tesla began upgrading the production lines at its Shanghai factory for higher capacity utilisation. The amount of additional capacity was not known at the time. Due to the current renovation work in the hall where only the Model 3 is assembled, the Model 3 and Model Y are currently being produced together on one line in the second hall, which was otherwise used exclusively for the Model Y. The Model Y is now being produced in the second hall.

It was known that the current construction work would be completed in April. However, the current measures will not be the big step towards the alleged seven-figure production target, but only optimisations of the existing production line.

This can also be deduced from the alleged investment sums: According to earlier statements, Tesla will invest up to 1.2 billion yuan or 167 million euros in the expansion work. This figure is also mentioned in the current report by Cailan. However, the current work is said to correspond to an investment of only 85 million yuan (11.7 million euros) or seven per cent of the total sum.

Even assuming that similar optimisations are still being made in the Model Y hall (if they were not implemented directly during construction), the majority of the budget would not yet have been spent. What measures can and should be implemented with the over 140 million euros is not mentioned in the report. It only mentions (with reference to people familiar with the processes) that after completion of the work there will be a “huge increase” in production capacity in the coming years. Whether Tesla will be able to more than double production capacity within the existing halls is an open question. So far, however, there is no talk of a new building in the industrial area in the south of the metropolis.

It is confirmed, however, that Tesla is looking for more employees for the plant. On Monday, the first working day after the Chinese New Year, the carmaker published a call for applications on its WeChat account – more than 1,500 positions are currently advertised. Earlier, Tesla said it planned to increase its workforce by 4,000 employees to 19,000 by April.