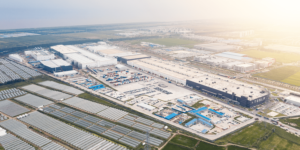 Tesla is upgrading the production lines of its Shanghai factory for higher capacity starting in December. The conversion work in the areas of the continuing production of the Model 3 and Model Y is expected to last until April 2022. In addition, the first Model Y Performance were delivered in China.

Tesla plans to invest 188 million dollars (167 million euros) in the plant conversion measure. This is said to be the result of an environmental report that was published a few days ago.

The expansion is to be implemented exclusively in the area of vehicle production – the area for pilot production, parts production and the joint workshop of the three areas will remain unaffected. In the vehicle production area, on the other hand, all important departments will be rebuilt, from the stamping shop to the body shop, paint shop and final assembly to logistics.

According to the document, only the Model 3 and Model Y will continue to be built at Giga Shanghai – and capacity for these models will be increased to an undisclosed value. In the Q3 annual business report, the annual capacity in Shanghai was given as 450,000+ vehicles. Thus, the current expansion serves – at least officially – to increase capacity for the two existing model series and not as preparation for the production of the compact Tesla, which has been speculated about for months.

Tesla has made Giga Shanghai its global export centre in the course of this year. In the course of this, the Model Y was also exported to Europe, contrary to earlier statements. In this country, only the long-range version is currently being delivered, while in China the standard-range version with only one motor and LFP battery is already available.

As has now also become known, Tesla has started deliveries of the Model Y Performance in China. Pictures of the first customer handovers were published on Tesla’s Weibo account. Incidentally, a Chinese blogger noticed that a ‘Ryzen’ processor from AMD is installed in the infotainment system of one of the delivered vehicles. Tesla has so far only installed this processor in the Model S Plaid; the other Model Y versions have an ‘Atom’ processor from Intel.

The new Model Y Performance costs 387,900 yuan (60,750 US dollars) in China, 107,148 yuan more than the basic version. This basic version with LFP battery is also sold out for the rest of the year. The Model Y Standard Range is therefore unlikely to be launched in Europe in 2021. It is not known whether Tesla will also bring the Model Y Performance from Shanghai to Europe – the performance version is supposed to be built in Grünheide soon.

Mercedes launches the EQS 350 in Germany