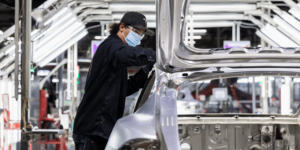 With more than 930,000 vehicles delivered, Tesla confirmed it also achieved new records in sales and profits in 2021, as the new annual report shows. The manufacturer itself speaks of a “breakthrough year”. In the medium term, Tesla wants to deliver 50 per cent more cars per year – and could thus come close to Audi as early as 2022.

In the meantime, the vast majority of profits come from the company’s own business: income from CO2 certificates, which had brought Tesla its first quarterly profits around two and a half years ago, amounted to 1.46 billion dollars in 2021 (-7 per cent compared to 2020). So even without the contribution of the “regulatory credits”, a profit of around four billion euros would have been on the books.

Such positive business figures had been expected after the production and delivery figures announced earlier this month. Tesla had delivered 936,172 electric cars in 2021, up 87 per cent from the 499,550 units in 2020 – during a global semiconductor crisis that has crippled the auto industry for months. As recently as the middle of the year, Tesla had only stated expectations of “750,000+” units.

Unsurprisingly, the majority of production and deliveries were for the smaller Model 3 and Model Y series. Tesla built a combined 906,032 units of both models and, with some vehicles built in late 2020, delivered a total of 911,242 units. The revised Model S was delivered from June and the Model X from October only in smaller numbers (a total of 24,980 units).

“The viability and profitability of electric vehicles should no longer be in doubt,” Tesla writes. “With an 87% increase in our 2021 deliveries, we achieved the highest quarterly operating margin among all volume OEMs based on the latest available data, demonstrating that electric vehicles can be more profitable than internal combustion engine vehicles.” According to the annual report, the operating margin was 14.7 per cent in the fourth quarter and 12.1 per cent for the full year.

Tesla is issuing two targets for the current year: Production and software – specifically, full self-driving software (FSD). “Our goal is to increase our production as quickly as possible, not only by ramping up production at new factories in Austin and Berlin, but also by maximising production at our established factories in Fremont and Shanghai,” Tesla said. “We believe that competitiveness in the electric vehicle market will be determined by the ability to add capacity throughout the supply chain and ramp up production.”

In addition, he said, FSD software remains one of the key areas. “Over time, our software-related profit should improve our overall profitability,” the annual report says. “More importantly, FSD is a key component to improving automotive safety as well as further accelerating the global transition to sustainable energy through higher utilisation of our vehicles.”

While vehicle utilisation is an issue for the future, in the shorter term it is likely to be about plant utilisation – or rather, because of high utilisation, capacity. For the new Gigafactory in Texas, Tesla states that production started at the end of 2021 and that they will start deliveries after final approval. For Grünheide, Tesla still states equipment testing. “We are still in the process of finalising the manufacturing permit from the local authorities, which will allow us to deliver German-made vehicles in Europe. These first vehicles will be built with 2170 cells.” No battery cell is specified for Austin in the annual report, but in the subsequent call Elon Musk confirmed that the Model Ys from Texas will be delivered with the new structural battery pack and 4680 cells from the start.

Fremont to increase vehicle production in the future

In the table of plants, both Giga Texas and Giga Berlin are still on “equipment test” status – so no actual production capacity is mentioned yet. For the main Fremont plant, the capacity remains 100,000 Model S/X and 500,000 Model3/Y – although Tesla says it believes there is the potential for more than 600,000 vehicles a year from Fremont in total. Tesla does not specify how many and whether they will be added to the large or small model ranges. The Giga Shanghai continues to stand at “over 450,000” units. For the Shanghai plant, which is to continue to function as a global export hub, Tesla does not necessarily want to further increase volume, but to reduce production costs per vehicle and stabilise supply chains.

While Tesla’s deliveries have increased by 87 per cent year-on-year compared to 2020, the Supercharger network has grown more slowly. At the end of December, Tesla had 3,476 Supercharger locations worldwide (+36 per cent), with 31,498 charging points (+35 per cent), according to its annual report. This means that each Supercharger has an average of nine charging points.

Tesla’s solar division was able to install systems with a capacity of 345 MW, which is an increase of 68 per cent compared to 2020 – when it was 205 MW. This means that the solar business, which has been ailing for a long time, has grown faster than the stationary electricity storage business – only time will tell whether this trend will continue. In 2021, Tesla was able to install 3,992 MWh of stationary storage capacity, an increase of 32 per cent on the 3,022 MWh in 2020, so growth has slowed somewhat here; from 2019 to 2020, installed capacity still nearly doubled.

Tesla could deliver more cars than Audi in 2022

As Tesla states, the storage growth was mainly driven by strong deliveries of megapacks, i.e. less by the home storage called Power Wall. But the big thing is that here, too, production capacity was the limit. Tesla says it could have sold more storage units than it built given the demand – and then the Megapacks were simply more profitable. Because of the continuing high demand, Tesla is also considering its own factory for the megapacks.

But electric cars remain the main business. And here, too, Tesla is very optimistic. In the outlook of the annual report, Tesla states that it wants to increase deliveries by 50 per cent over a period of several years. To extrapolate this briefly: For 2022, this would correspond exactly to 1.4 million units (and thus roughly the size of Audi), in 2023 Tesla would reach 2.1 million vehicles – quite exactly the value that Mercedes-Benz Cars achieved in 2021 (2,093,476 passenger cars).

Kia reveals prices for the EV6 in the USA

Renault-Nissan-Mitsubishi kicks up a gear in e-mobility planning