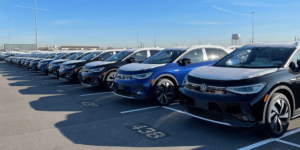 In view of the high demand for electric cars, the VW Group is reportedly reducing the ordering possibilities of its dealers and introducing a quota system for sales partners. Accordingly, larger dealers will be able to order more vehicles than smaller ones.

This is reported bybAutomobilwoche and refers to an internal letter. According to the letter, it is not the demand but the total turnover of the dealer that decides on the allocated quantity. In other words, large dealers can order more ID.3 and ID.4 than smaller ones. With an annual target of the distributor of up to 999 vehicles, 15 ID.3 and 25 ID.4 can be ordered, the letter says.

Depending on the development, the quota will be adjusted in the course of the year. The report does not specify the range in which the adjustment could take place.

In fact, not only the high demand mentioned in the report is likely to be the reason for the quota, but also the fact that the company cannot build as many vehicles as it wants. Semiconductor supply will still have a huge impact on production volumes in 2022.

According to dealers, customers are currently waiting around twelve months for an ID.3, while Volkswagen itself speaks of a delivery period of “more than nine months”. The situation is similar for the Audi Q4 e-tron, also built in Zwickau: those who order now will not receive the vehicle until mid-2023, and according to the manufacturer they will wait “around twelve months”.

However, it is not only battery-electric cars that are affected by the long waiting times. Automobilwoche also cites the example of the Skoda Octavia iV, a plug-in hybrid. The Czechs presented the model in September 2020. Those who order a new vehicle now will not receive it until August 2023, according to the dealers. Skoda itself speaks of a delivery time of “well over a year”.