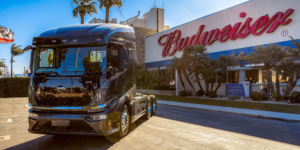 US brewer Anheuser-Busch has ordered another 20 electric trucks from BYD to add to its California fleet later this year. It is the fourth order of zero-emission vehicles in a row from different manufacturers. The brewery is, in fact, installing a “Zero-Emission Beer Delivery” line.

We come to said “zero carb beer” in a moment. However, for the order at hand, it is the second time Anheuser-Busch has turned to BYD. In 2019, the brewer already bought 21 heavy-duty electric trucks. The year before, the company had also ordered 800 H2 trucks from Nikola Motors and another 90 Tesla trucks a few months earlier.

While Anheuser is, of course, still waiting for Tesla to start building and eventually delivering the Semi electric trucks, the BYD and Nikola vehicles are already working together. For example, the company used the Superbowl weekend just past to demonstrate a beer delivery chain from Anheuser-Busch’s brewery in Van Nuys, California, to clients in Los Angeles using only zero-emission vehicles. A Nikola Tre fuel cell truck (pre-series) picked up a load of beer from the brewery and delivered it to their distribution facility in Carson, CA. From there, a BYD battery-electric 8TT day cab tractor delivered the crates of Bud Light beer to local bars and retailers.

The Nikola Tre is part of a three-month pilot, which Anheuser considers “an important step for both companies to refine the production specifications and features of the Nikola vehicles and to demonstrate the viability of fuel cell trucking and hydrogen refilling in beverage hauling.”

The BYD truck involved comes from the 2019 order through which vehicles were deployed in 2020 as part of the Zero- and Near-Zero Freight Facilities/Zero Emission Beverage Handling at Scale project. The brewer operates 25 BYD trucks across four California distribution centres and expects the newly ordered 20 to join the fleet shortly.

Said fleet expansion is also a result of the California HVIP program and continued partnership with the California Air Resources Board and CALSTART to deploy advanced technology that is cleaner and quieter on the road, so the brewery.