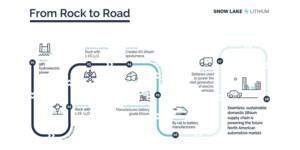 The Canadian company Snow Lake Lithium has unveiled plans for a lithium mine in Manitoba, Canada. The mine is to produce 160,000 tonnes of lithium annually for the North American electric car industry from the end of 2024.

According to Snow Lake Lithium, the plant will draw its energy almost entirely from hydropower and thus be particularly low in CO2 emissions during operation. Specifically, 98 per cent of energy from hydropower is mentioned. In Manitoba, rock with a lithium oxide content of one per cent is to be mined first; in the plant, the lithium content is to be initially increased to two per cent through grinding and sorting. In a further step, spodumene with six per cent lithium hydroxide will be extracted, which will be delivered to the battery material factories – by rail via the Artic Gateway railway.

Snow Lake, which gives the site its name, is located in the west of the province of Manitoba, about seven hours’ drive north of the provincial capital Winnipeg. According to the company, it owns 55,000 acres or the equivalent of just over 22,000 hectares of land there. Currently, only one per cent of the site has been explored, but the company is confident that this will be expanded over the next year. Drilling and technical evaluation will continue in the coming months, he said.

By the planned start of production in late 2024, Snow Lake Lithium aims to partner with a battery producer or car manufacturer, according to the statement. The plan is to establish a joint venture to build a lithium hydroxide processing plant, Snow Lake said.

“We are facing a once-in-a-century industrial pivot as North America accelerates towards an electrified future,” said Snow Lake CEO Philip Gross. “If we don’t act now to secure a seamless lithium supply chain from rock to road, the North American car industry will not exist in 10 years’ time.”

Mining is anything but new in Manitoba. Gross says the development of an electric vehicle supply chain offers “a unique opportunity to achieve economic growth and ensure a sustainable future for mining in the province.” They are working closely with the province of Manitoba, he said.

Snow Lake Lithium is listed on Nasdaq, with the symbol LITM.

ADS-TEC Energy hedges plans for first factory in the US