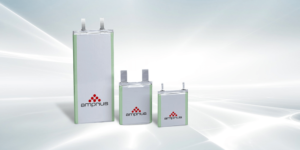 California’s Amprius Technologies has delivered cells with an energy density of 450 Wh/kg and 1,150 Wh/l respectively, initially for use in satellites. However, the cells with silicon in the form of nanowires as anode material could also make it into future electric vehicles.

Amprius had only announced the cells with a gravimetric energy density of 450 Wh/kg at the beginning of November 2021 – as a further development of the 405 Wh/kg version. This pace, according to COO Jon Bornstein, “underscores the acceleration of our roadmap to deliver products with unrivalled performance”.

So far, the battery developer sees applications for its cells primarily in aerospace – and not just because of its satellite industry customer. The use in electric cars is not confirmed, but not explicitly excluded either.

In this context, it is interesting that Amprius moved its headquarters to the immediate vicinity of Tesla’s battery production plant in Fremont in 2020. Elon Musk, however, denied any potential cooperation at the time.

In 2020, Musk had said in the run-up to Battery Day that battery cells with an energy density of 400 Wh/kg were still “three to four years” away from market maturity. Extrapolated to the battery size of a car, this would bring significant weight savings. With such an energy density, the cells – mind you, not the ready-to-install battery pack including BMS and cooling systems – would still weigh just under 190 kilograms for a 75 kWh battery. At today’s standard 260 Wh/kg, this would be around 100 kilograms more.

Amprius now announces that the location of the company’s first large-scale production is to be determined this quarter – so far it is only clear that it will be built in the USA. Amprius has not yet made any further statements about this plant, such as a limitation to certain US states or the planned production capacity.

Orbia’s Fluorinated Solutions brand Koura announced that its Silatronix OS3 electrolyte material is now being used in commercial lithium-ion batteries manufactured by Amprius Technologies. The introduction of Silatronix OS3 has seen the battery cells achieve an energy density of 450 Wh/kg and 1,150 Wh/l, which is among the highest of any commercial lithium-ion cell in the world. Amprius battery cells achieves this level of energy density by applying their proprietary Si-Nanowire platform, which utilizes 100% silicon in the anode.