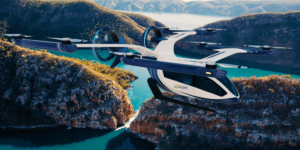 Electric aerial taxi manufacturer Eve Urban Air Mobility Solutions, a subsidiary of Brazilian aircraft manufacturer Embraer, has received two orders for a total of up to 90 eVTOLs from Australia. Aviair and HeliSpirit are ordering up to 50 electric aircraft from Eve and Microflite up to 40.

Both agreements were signed at the Singapore Airshow currently underway, according to Eve parent Embraer. The up to 50 for Aviair and HeliSpirit are expected to be delivered and deployed from 2026. The two companies intend to operate the aircraft in Western Australia, offering flights to tourist attractions in the Kimberley, South-West and Greater Perth regions.

The eVTOLs will expand the existing fleet of more than 50 rotary and fixed-wing aircraft there, but will not replace them for the time being. “Eve’s eVTOL technology is well-aligned with our business model and desire to be at the forefront of carbon-neutral solutions for the aviation industry,” said Michael McConachy, managing director of Aviair and HeliSpirit. “The low-noise footprint of the aircraft makes them particularly well-suited to operations in sensitive natural settings, including national parks and World Heritage-listed areas, as well as for urban transfers providing quick and efficient solutions for both business and tourism travellers.”

The 40 eVTOLs for Microflite are also scheduled for delivery from 2026, but this time to Melbourne in south-eastern Australia. There, the aircraft will be used in UAM (Urban Air Mobility) applications – those services colloquially known as air taxis.

Together, Microflite and Eve plan to work with municipalities and other stakeholders to create a “safe and scalable operating environment for eVTOL operations”. “After working closely with Eve over the past few months, we have identified a network of potential routes and we look forward to working with commercial partners and communities to prioritise these routes and trial selected operations with our existing fleetfleet,” said Jonathan Booth, CEO of Microflite.

The Embraer spinoff Eve had already won two major contracts in June 2021. In October, it announced a collaboration with Avantto to develop an urban air mobility ecosystem for Latin America. Here, 100 eVTOLs are to be deployed (also from 2026).