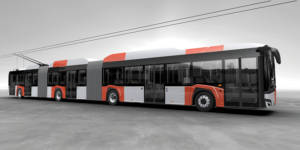 The Prague transport operator DPP has ordered 20 double-articulated trolleybuses from the consortium of Solaris Bus & Coach, Solaris Czech and Škoda Electric. The Solaris Trollino 24s are to be delivered within the next two years and will be used in the Czech capital.

The electric trolly buses manufactured by the consortium between Solaris and Skoda Electric are 24-metres-long and are each equipped with four axles – two of which are drive axles. According to information from last year, the buses are powered by two traction motors with 160 kW each, which feed two drive axles. The motors get their power from a 58 kWh battery, which in turn draws energy from the overhead line via a pantograph mounted on the roof. Thanks to the large buffer battery, the Trollino 24 can also cover distances without overhead lines. The driver can switch between overhead line and traction battery mode at the touch of a button. Solaris specifies a minimum range of eleven kilometres in battery mode.

The ordered trolleybuses have space for a total of 179 passengers, 54 of which are seated. Two spaces are provided for wheelchair users. The buses have five doors in a 2-2-2-2 arrangement, a video surveillance system consisting of cameras for surveillance, a reversing camera and a pantograph camera.

Solaris’ double-articulated trolleybus was first presented to the public at Busworld in Brussels in 2019. In 2020, it was tested in regular passenger service in Bratislava. Solaris made the announcement about the vehicle in 2018, and the company announced the first order in November last year. The Trollino 24 will make its debut on the streets of the Slovakian capital Bratislava in mid-2023. The order comprises 16 examples of the double-articulated trolley bus.

The Trollino buses are also available in different lengths. Since 2001, the bus builder says it has delivered 1,800 Trollino to customers in Europe.