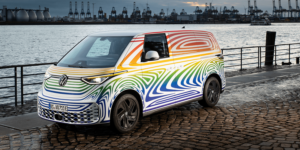 Shortly before the world premiere on 9 March, VW Commercial Vehicles has officially announced key data on the series version of the ID. Buzz for the first time – both the drive and the body. So far, there is still no confirmed information on the price and exact market launch.

The 2022 versions of the five-seater ID. Buzz and the three-seater ID. Buzz Cargo with a normal wheelbase (2.99 metres) will have a length of 4.712 metres. This puts the shorter version of the ID. Buzz is eleven centimetres above the shortest version of the widespread Stellantis vans (4.60 metres). In the course of the coming year, an extended wheelbase will be offered, on which the seven-seater will then also be based. VWN has not yet provided details on its wheelbase and vehicle length – the competition ranges in steps of around five metres and around 5.30 metres for the XL versions.

The height of the ID. Buzz is given as 1.94 metres (the ID. Buzz Cargo is one millimetre higher at 1,938 to 1,937 mm) and the width is 1,985 millimetres (without exterior mirrors). The turning circle of the electric Bulli is just over eleven metres.

Both versions of the ID. Buzz will start in 2022 with the 82 kWh battery (net: 77 kWh) and the 150 kW electric motor on the rear axle. The top speed is electronically limited at 145 km/h. Official values for the range are not yet available. In other reports, there is talk of around 500 kilometres for this battery variant – it is, however, open whether in the combined WLTP or the city cycle. Some media are also likely to drive the prototypes. In the video of the electric car rental company Nextmove, the display shows consumption of around 28 kWh/100km in cool and windy conditions – which would mathematically correspond to a practical range of 275 kilometres. If consumption continues to rise on the motorway and only 80 per cent of the battery is used, around 200 kilometres between two charging stops should be realistic for the long haul.

The ID. Buzz should have the latest version and, according to the reports, be able to charge from five to 80 per cent in 30 minutes. Nextmove reports, citing some of the delivery drivers, that the ID. Buzz (more precisely, the pre-production vehicles tested) can charge at up to 170 kW in peak. What is confirmed, however, is that the ID. Buzz will support Plug&Charge as well as bidirectional charging – but VW is relying on a combination with a DC wallbox charger.

According to various reports, other battery variants and the all-wheel-drive model are not expected until the end of 2023. For the ID. Buzz Cargo there will probably be a Pure version with 52 kWh. A battery option above the 77 kWh is also planned, but it will probably not be the maximum possible configuration of 111 kWh for the MEB – but this has not been confirmed.

The five-seater ID. Buzz can accommodate up to 1,121 litres of luggage with all passengers on board. The maximum storage volume of the ID. Buzz Cargo, which is equipped with a partition behind the first row of seats, is over 3,9 cubic metres. Buzz Cargo is over 3.9 cubic metres. Shortly after the start of production of the ID. Buzz in the first half of the year, the European market launch is scheduled for autumn. The ID. Buzz will also be launched in the USA.

Official prices have not yet been revealed. Most recently, there were reports that the base price for the passenger car model would be under 55,000 euros with the currently available 77 kWh battery.