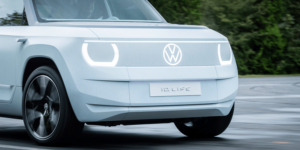 Volkswagen has decided on a new direction for its upcoming electric small car ID. Life. The concept presented at the IAA in 2021 has fallen out of favour in Wolfsburg already.

The information was reported by the usually well-informed automotive journalist Georg Kacher in an article for the German publication Automobilwoche. Instead of the ID. Life with clear retro design borrowings from the Golf I, the electric small car is to be completely redesigned. According to the article, VW chief designer Jozef Kaban is working with his team on a “new, decidedly modern design that is also intended to captivate young customers in terms of multimedia and connectivity”.

However, the report does not reveal what consequences this will have for the interior and the operating concept compared to the current ID. models. On the other hand, there is information on the body: according to “initial rumours”, this will be a five-door hatchback in Polo format, which will offer a similar amount of space inside as the Golf – since it can take advantage of a pure EV platform without a large engine compartment at the front and the flat floor of the interior.

Despite the new orientation, Kacher says the market launch will remain in 2025 with the model designation ID.2. Possibly the model will be given the additional designation ‘Urban’, but that has not yet been decided. What is much more likely is that a small SUV with the name ID.2 X will go on sale in 2026 as an electric counterpart to the T-Cross.

Kacher has not yet given any details on the possible technical specifications of the ID.2 Urban. The IAA concept ID. Life had a 57 kWh battery and 172 kW of power. Even before the IAA, VW Group CEO Herbert Diess had indicated that it was very likely that LFP cells would be used instead of NMC cells for the electric small cars.

In addition to the small electric car, Kacher has learned some updates on the other ID. model family: the concept of an electric sedan in Passat format, previously called Aero B, will probably be presented as a near-production show car at the car show in Beijing in April. The market launch will then take place in 2023 under the name ID.6. The MEB SUV available in China with the same code number will be offered as ID.6 X or ID.6 Crozz to distinguish it – depending on whether it is built by the VW joint venture with SAIC or with FAW. Around 18 months after the ID.6 saloon – so presumably in the course of 2025 – an estate or shooting-brake version should then be unveiled. The report does not say when the decision will be made as to whether it will be a practical estate like the Passat or a dynamic shooting brake like the Arteon.

The final model name of the Trinity prestige model announced for 2026 has also not yet been decided. According to Kacher, the larger sedan could be called ID.7 and be flanked by an SUV offshoot called ID.7 X. However, the model has not yet been announced – also internally. This model is of outstanding importance to VW – also internally – which is why the Trinity may not be added to the list of well-known MEB models: Apparently, an independent name like the ID. Buzz is being discussed. The abbreviation ID.8 is currently little more than a placeholder for the electric successors to the Touareg and Atlas.

BMW is bringing the i4 to China