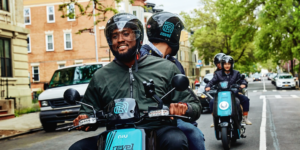 New York multi-modal EV sharing startup Revel has raised a $126 million Series B in a funding round led by BlackRock.

Revel will use the finance to scale up its moped operations. In just two years, the startup company has grown to include more than 1,400 moped electric scooters across Washington, D.C., and Brooklyn and Queens, New York. Revel is targeting about 10 cities in future. Revel also offers ride-sharing in electric cars, electric bicycles, said electric mopeds and charging services for electric cars in what the company called Revel Superhubs.

Following a $34 million Series A last year, the latest investment brings the company’s total funding to around $165 million. Representatives from BlackRock and Toyota Ventures will join Revel’s board of directors. Revel plans to use the funds to expand its network of EV fast-charging ‘Superhubs’ throughout 2022.

Revel stands out because the company prides itself on offering full-time secure employment for its staff and uses battery swapping for its electric mopeds, which makes it easier to renew, reuse and recycle the batteries. The company has primarily focused on micromobility.

CEO and co-founder Frank Reig was interviewed about the company’s plans for scooter expansion by TechCrunch. He said that when he was in Buenos Aires, Argentina, he noticed just how many moped scooters are used in mobility outside of the USA and Europe. Not to mention that billions of people in Asia also make do with motorised two-wheelers. “A sort of light bulb went off my head, and I asked myself, ‘why is it not a thing in the US?,” Reig told TechCrunch. “I came back to New York, started studying the market more and saw all these electric moped operators had been popping up in Europe over the last few years and just realized that if I don’t do it, somebody else will.”