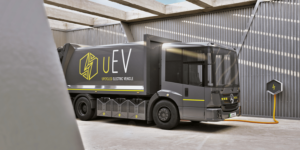 British electric ‘restomodding’ startup Lunaz has closed a new funding round that brings the overall value of the company to $200 million. The company also unveiled a new ‘upcycled’ rubbish truck retrofitted with electric motors and batteries.

The facility will house the company’s new HQ and produce electric utility vehicles (UEV) in a space covering 210,000 square feet.  The new facility is planned to open this year with 300 technicians and engineers.

The first retrofitted utility electric vehicle will be based on the Mercedes Econic platform. The company says the retrofitted rubbish truck will be the first of a fleet of Lunaz Industrial Upcycled Electric Vehicles (UEV).

Besides the drive and power storage systems, retrofitted vehicles benefit from all of the new technology of newer vehicles. Here, Lunaz adds new safety and control equipment such as removing wing mirrors and replacing them with cameras with “the latest blindspot protection through side-facing RADAR and 360 birds-eye view cameras.”

Lunaz is planning to build more than 1,100 of its upcycled industrial vehicles every year from its base in Silverstone, England.

The company comes from a background of retrofitting luxury cars. A ‘restomod’ is a popular term in the world of collector cars. The restomodding process involves mixing old and new technology to develop a vehicle that offers the best of each end of the spectrum, which means it is ‘upcycled’. Lunaz has converted models from Rolls Royce, Range Rover and Astor Martin. Using the correct use of the term ‘upcycling’ the process takes an older product and makes it into something even more valuable.  More recently the company has responded to the booming market for electrified municipality vehicles and now also produces upcycled waste disposal vehicles.

David Lorenz, Lunaz’s founder said: “By upcycling and electrifying industrial vehicles at scale, millions of tonnes of embedded carbon is saved by dramatically extending the usable life of thousands of vehicles that would otherwise be scrapped. By applying this approach to public sector vehicles like refuse trucks we deliver a result that is better for the taxpayer and better for the planet.” Jon Hilton, Lunaz’s Managing Director and Technical Lead added: “At Lunaz we have gathered an extraordinary technical team to create a robust and modular electric powertrain solution that can be applied to multiple industrial vehicle applications.”

With the announcement of its latest financing round, the UK company also revealed that it has signed fleet electrification agreements with major councils and private businesses in the UK and US. Here, the expected market entry date is 2023.