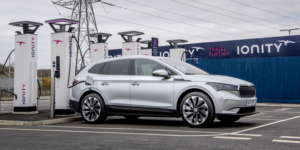 Skoda has announced a software update for its MEB models in the Enyaq family. Called ME3, it includes improvements in range and charging performance, just like the underlying E3.0 update at VW. But it also adjusts some of the criticized displays.

Skoda has been using the new ME3 software version in the Enyaq Coupé iV since the recent start of production, and it will also be used in all new Enyaq iVs. Enyaq iVs already delivered to customers are to be updated to the new software level via a free update during a dealer visit in the second half of 2022, according to Skoda.

Volkswagen has already introduced the E3.0 update into production at its Zwickau plant in December 2021. The two Enyaq derivatives are so far the only MEB models in Europe not built in Zwickau – but only until ID.4 production in Emden and assembly of the ID. Buzz start in Hanover.

For the Enyaq variants with a 62 kWh battery (58 kWh net), DC charging power increases to up to 120 kW at peak with the update, and up to 135 kW for the 82 kWh battery (77 kWh net) – analogous to the VW models. However, Skoda differs from Volkswagen when it comes to the charging time: While according to VW the charging time to 80 per cent drops from 38 to 29 minutes, Skoda specifies 35 minutes.

Also new is a “battery care mode” that customers can activate via the central infotainment display. This only charges the battery to a maximum of 80 per cent during the next charging process, according to Skoda’s description. The program is also designed to reduce the speed for charging with direct current and the maximum charging power to avoid power peaks. “These measures, similar to the ‘eco mode’ on a smartphone, help to conserve the battery and extend its life,” Skoda writes. Charging performance and power output are also said to be improved by the battery heater, which is now controlled differently. This is intended to bring the drive battery into an ideal temperature window more quickly and keep it there longer.

These measures should also increase the achievable range. In the announcement, however, Skoda only mentions the figures for the Enyaq Coupé – which is of little significance, since the Coupé will be delivered exclusively with the ME3 software. The new range of the Enyaq compared to the models with older software status is not mentioned – probably also because Skoda does not want to re-homologate the model. So in the brochure, the WLTP range remains the same. VW, however, speaks of the E.30 update of up to 50 kilometers more range, which should also be possible in winter temperatures.

In addition, the ‘Charging’ menu in the infotainment and the charging planning in a route guidance have been adjusted. The charging and range graphic now also includes the display of the destination and necessary charging stops. A new ‘Add’ button is said to allow users to schedule an alternative charging station in the navigation system. “For all planned charging stops, the remaining battery capacity and the intended charging time are indicated in detail,” Skoda wrote.

Another innovation requested by customers is that the Digital Cockpit displays the battery’s state of charge as a percentage in addition to the corresponding filled battery symbol. The charge level will also be shown in the head-up display in the future. Other changes to the displays in the Digital Cockpit and in the head-up display relate to the representation of objects in the vehicle’s surroundings and the three-dimensional representation of the distance to the destination.

As announced, Skoda has started the software update to version ME3 for previously delivered Enyaq iV vehicles. Among other things, the update brings optimisations to the battery management system and thus enables a higher real-world range.

Customers will be contacted by their local Skoda partner to arrange a free service appointment, the manufacturer says. In the workshop, the new software is installed within about five hours. Future updates will then be largely ‘over the air’.

Skoda is expanding the Powerpass charging options for the Enyaq iV electric car family with the “Plug & Charge” function. For vehicles with the latest ME3 software, the charging process can now be started at suitable charging points simply by connecting the charging cable; the vehicle is identified automatically at the charging point. All newly produced Enyaqs will now already come with this functionality ex-works. For vehicles already delivered, the function is installed “over the air”, provided the ME3 software update is installed. All future Skoda models based on the modular electrification kit (MEB) from the Volkswagen Group will also support this option.

Renault to bring back the Scénic compact van