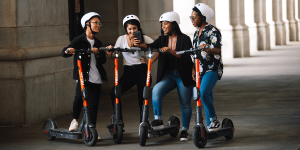 Tier thus continues to ride the wave of expansion. Since acquiring the European bike-sharing service Nextbike last autumn, Tier has been active in over 410 cities with a fleet of 250,000 vehicles.

Adding Spin and its 50,000 vehicles, Tier says it expands its global footprint to more than 520 cities and towns in 21 countries and its fleet to 300,000 vehicles. However, this latest acquisition is specific to North America. Spin in January had withdrawn from all open permit markets, effectively moving out of Europe, aside from the UK.

Spin’s team under Tier will continue in North America as a separate entity while transferring its UK business to the new owner at a later date. To further integrate the Spin scooters, Tier says it would invest in equipping the Spin fleet with 100% swappable batteries without setting a timeline yet.

Lawrence Leuschner, CEO and co-founder of Tier Mobility, called the acquisition of Spin and his company’s entry into the North American market “huge milestones.”

Tier says 106 communities being added to the service in the US and Canada. They claim this would make Tier the largest multimodal micro-mobility operator worldwide. Their services include bicycles, e-bikes, cargo bikes, and e-scooters into free-floating and station-based sharing systems.

Franck Louis-Victor, Vice President, New Businesses at Ford, added there were “incredible synergies between Spin and Tier, and this new era will provide scale that’s desperately needed in the competitive micro-mobility sector.”

Ford will remain a strategic investor. At the same time, Tier won’t have had too much difficulty in funding the acquisition. The company raised Tier Mobility raised 200 million US dollars (171 million euros) last October from existing and new investors. The money was earmarked “for acquisitions and strategic investments” already at the time. To date, Tier has raised $660 million in equity and debt.

Tier and Spin will not disclose the investment value. JP Morgan acted as a financial advisor.