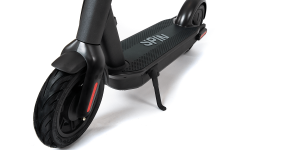 Spin, the scooter-sharing service Ford acquired in 2018, is withdrawing from various markets due to unprofitability. This affects Germany, Portugal and Spain, and some US markets. Spin CEO Ben Bear shared the company’s reasoning in an email to staff.

The news later broke on the Spin blog as well. Writes Bear: “Today, we shared the difficult news with Spin employees that we are beginning to exit nearly all open permit markets globally to accelerate our path to profitability.”

Open permit markets are, for example, cities where multiple scooter-sharing companies compete freely, often leading to cluttering and also scattered services and little profitability. Modern approaches have seen more cities put out tougher tenders, often limiting the numbers of competitors and requiring safety measures such as geo-blocking and other features. London is a prominent example or Paris and smaller towns across the UK.

The Spin CEO, in his message, went on explaining that open permit markets  were “free-for-all markets”, which created an “uncertain operating environment—marked by frequent changes in the competitive landscape, no caps on fleet sizes, and race to the bottom pricing.”

As a result, Spin said it would wind down operations in a few unnamed US markets, all of their markets in Germany and Portugal, while also projecting closure of Spain as early as February 2022.

To go forward, the company will focus on “limited vendor markets”, where cities or campus officials select partners through a competitive procurement process. “We see double the revenue per vehicle in limited vendor markets compared to open permit markets,” added Bear.

Spin further informed its renewed focus on said regulated markets in the United States, Canada, and the United Kingdom, effectively taking the company out of Europe. Spin in 2020 had announced the expansion on the continent for the first time.

The restructuring will impact about a quarter of the Spin staff. Affected employees will be offered severance packages and an additional stipend, so Spin.

The decision is also not too surprising. When Ford took over in November 2018, Spin had just launched in San Francisco in March of the same year, alongside competitor Bird. Several complaints about the sheer number of kick scooters coupled with a few accidents forced the city to shut down the sharing services over that summer, and Spin soon ran into similar issues in Europe.