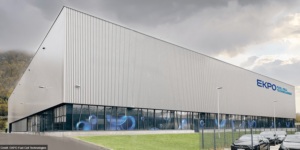 Starting in 2023, EKPO will exclusively supply the stack modules for Globe’s fuel cell system, according to the company. The term of the development and supply agreement is initially four years. The basis for the development is to be EKPO’s “NM5-evo” stack. EKPO is not disclosing the financial scope of the agreement.

Globe is a Stuttgart-based company that emerged from the innovation division of Mercedes-Benz in 2020 and develops fuel cell power units for a wide range of applications, including intralogistics, the marine sector and stationary applications.

Globe will then assemble the stack modules manufactured and supplied by EKPO into its XLP genset, according to the announcement. According to EKPO, the “NM5-evo” platform enables a power density of over 6.9 kW/l in the cell block. Globe does not yet provide concrete details on the fuel cell generator on its homepage, but the XLP80 is to be used in industrial trucks – and since charging times are eliminated compared to battery-electric industrial trucks, the TCO is said to be significantly better. Globe does not provide figures, however.

“The partnership with EKPO allows us to achieve even more quality and speed in the development of our XLP series for the intralogistics market,” says Steffen Bäuerle, managing director at Globe. “It is great to work with a partner like EKPO from the region and thus drive our GreenTech approach – Made in Germany – with which we accompany the industry into a CO₂-neutral future.”

“The agreement with Globe again demonstrates that our fuel cell stacks have a wide range of potential applications. EKPO already has the installed capacity to produce fuel cell stacks industrially, which is critical to support ambitious and fast projects such as Globe’s,” said Julien Etienne, Chief Commercial Officer at EKPO.