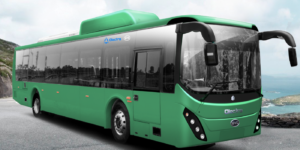 India`s manufacturer Olectra Greentech Limited has added 150 more electric buses to the public transport fleet in Pune. The city now has a total fleet of 300 electric buses from Olectra.

Olectra Greentech is a joint venture between Olectra (formerly called Greentech) and its technology partner BYD. The company says itis confident of adding another 350 buses to Pune Mahanagar Parivahan Mahamandal Ltd (PMPML) in the next few months.

The electric buses were not specifically named in the company’s announcement of delivery, but the company’s K9 bus would fit the description– with its 12 metre length and a range of around 200 km on a single charge. Olectra says the newly delivered electric bus has a regenerative braking system that allows the bus to recover part of the kinetic energy lost in braking. The bus can fully recharge in around 3-4 hours.

For the safety of commuters in the city with a population of almost 7 million people, the buses are equipped with CCTV cameras and an emergency button for each seat along with USB Sockets.

Olectra says has already delivered over 600 electric buses to various state transport undertakings (STUs) in India and currently has orders for 1,523 electric buses from various STUs across the country.

The Indian-Chinese joint venture says it is planning to enter into an inter-city / inter-state private transport segment and staff transportation segment in private sector. With this growing demand for electric buses, the company is expanding with the acquisition of 150 acres from the Government of Telangana to establish a “state-of-the-art, fully-automated robotic” manufacturing plant. Olectra plans to manufacture 10,000 buses per year with the expanded capacity.

Olectra-BYD already has a production facility in Telanga where it has already been producing the nine-metre-long K7 or the K9 (12 metres). In 2018, Olectra-BYD was contracted to deliver 500 electric buses between April 2019 and March 2020. The same year, Olectra-BYD announced their plans to produce 5,000 electric buses per year in India. Now, just four years later, the company is aiming to double these electric bus production capacities. Olectra also says it has plans to expand its product line by launching trucks, light commercial vehicles, three-wheelers and other EV products.