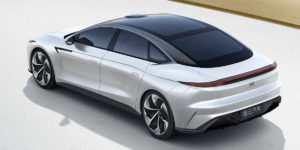 The joint venture between SAIC and Alibaba has started serial production of its first electric model in China. IM Motors’ first product is a luxury sedan called IM7, scheduled for delivery from April.

IM Motors (Zhiji Motor in Chinese) had unveiled prototypes of its first two electric models in early 2021. Now, series production of the IM L7 has begun at SAIC’s factory in southeast Shanghai. The plant is situated in the Lingang New Area, near Tesla’s Giga Shanghai factory.

The electric car is scheduled to hit the market on March 29, with the first deliveries planned for April. However, they won’t be the first IM L7s on China’s roads: according to the portal Pandaily, IM Motors has already delivered a batch of 200 beta versions at the end of 2021.

The L7 is just over five meters long and will initially launch with a 93-kWh battery. According to earlier information, another version with 115 kWh is planned for later release. In both cases, the battery cells will come from CATL. After its premiere at the Auto Shanghai show in April 2021, pre-sales started at 408,800 yuan (59,460 euros). The 93 kWh model is available with one motor in the rear, while the all-wheel-drive versions will run with two electric drives.

IM Motors is now taking orders for the L7 in China, according to an article from cnevpost.com. The first deliveries are expected to start at the end of April. IM Motors said that the joint venture between SAIC and Alibaba is currently offering only the L7 Pro version at a retail price of 408,800 RMB (about 57000 euros), which is the same as the pre-sale price announced at the end of April last year.

Polestar expands their Supervisory Board