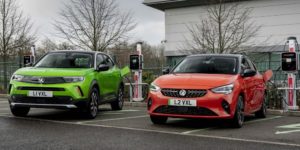 The British electric car subscription service Onto has ordered another 700 electric cars for its fleet. The cars in question are 700 Corsa-e and Mokka-e from Vauxhall that can now be booked via Onto.

Stellantis says that the Corsa-e and Mokka-e are scheduled for delivery in March and April. Onto has chosen the models with ‘Elite Premium’ trim with two-tone 17-inch rims, a black roof and, in the case of the Corsa-e, LED matrix headlights. Inside, both models have a ten-inch touchscreen and features such as a heated steering wheel, heated front seats and front and rear parking sensors. Onto offers the Corsa-e from £549 per month and the Mokka-e from £579 – the equivalent of 658 and 695 euros respectively.

Onto was founded in 2017 and has since added a whole range of electric vehicles to its subscription fleet, including some sister models to the two Vauxhalls such as the Peugeot e-208, e-2008, DS3 Crossback E-Tense and also the Citroën ë-C4. All models rely on the familiar 100 kW powertrain and a 50 kWh battery that can be charged to 80 per cent in 30 minutes.

Paul Willcox, Managing Director, Vauxhall, said: “I’m thrilled that Onto customers will be able to experience two of our fully electric models, the Corsa-e and Mokka-e. I’m sure they will prove very popular and customers will enjoy their striking designs, impressive technology and WLTP range of over 200 miles. Our aim is to democratise access to electric vehicles, so partnering with Onto is a great way for more drivers to be able to experience the benefits of driving electric.”

In October last year, Onto ordered 1,050 Renault Zoe, following the 1,100 Zoe already ordered the year before. The last year or so has seen Onto procuring various electric models from other manufacturers, including the Fisker Ocean EV, Audi’s e-tron. On our count, the Onto fleet must now comprise of over 8,000 electric cars for subscribers to rent from £389 a month.

Vauxhall says it will offer an electrified variant across its entire model line-up by 2024 and will only be selling electric cars and vans by 2028 – seven years ahead of the UK Government deadline. Just last week, Vauxhall’s mother-company Stellantis raised its electric ambitions, when the carmaking conglomerate presented its strategic plan for the coming decade with ‘Dare Forward 2030’. By the end of this decade, 100 per cent of its sales in Europe and 50 per cent of its sales in the USA will be purely battery-electric vehicles.