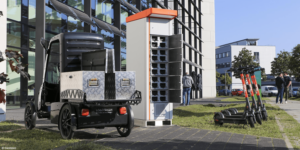 The Berlin-based battery swapping station company Swobbee has raised 5.9 million euros in its Series A financing round. The financing round was led by the organisation EIT InnoEnergy that has joined Swobbee as a strategic investor.

EIT InnoEnergy and an existing investor have invested just under three million euros each. With the total of 6.5 million dollars – or 5.9 million euros – Swobbee wants to expand its network of battery exchange stations throughout Germany and into two other European countries.

EIT InnoEnergy’s support is not only financial but will also assist with its “special know-how in building and scaling young green tech companies as well as its large international network”, and will be closely accompanying Swobbee in its business development and entry into new markets.

Jennifer Dungs, Head of Transport and Mobility at EIT InnoEnergy, said: “Micromobility plays a crucial role in the transport transition in urban areas. It is therefore all the more important to establish a comprehensive network of high-performance charging and exchange stations for all the different types of vehicles. With its manufacturer-open technology platform, Swobbee has what it takes to take an outstanding position in the market.”

The battery-swapping rolemodel for Sowbbee is the Taiwanese provider Gogoro, which has created a de facto standard for exchangeable batteries for electric mopeds in Taiwan and is now expanding to China and India. Here, Thomas Duscha, CEO and co-founder of Swobbee also sees differences: “Gogoro’s is a highly vertically integrated model with e-mopeds, but as we know, the e-moped will never be the number one transport mode in Europe, so we believe in small mobility like e-bikes, cargo bikes and kick scooters.” Here, Swobbee does not want to utilise one uniform battery size, but rather offer different batteries in its changing stations as an open-manufacturer system.

Swobbee began with B2B pilot projects primarily utilising synergies in last-mile delivery micromobility vehicles, such as DPD, Hermes and DHL. But the Berlin startup is also working with fellow-Berliner company Tier assisting with Tier’s own battery swapping stations with backend support. Now, with this new funding round and a recent spate of new partnerships, the company has the potential to move into the B2C micromobility segments. Duscha told TechCrunch, that Swobbee has recently signed on one of the “top three” micromobility operators as a client, while declining to disclose more specific information. He only said that the nature of that partnership would look a lot like Swobbee’s deal with Tier.

Now, in 2022, Swobbee is not only aiming to expand its fleet customers, but also to reach average consumers with personal vehicles, more like the Gogoro model. “This year, we are piloting together with the European Union a B2C model where we would like to discover if swappable batteries or battery-sharing services could be a thing for European customers,” said Duscha. “We know that in Asia, especially in East Asia, it’s pretty much working, but we need to see if this also works in Europe.”

Just last month, Swobee agreed to collaborate with the American-Chinese firm Segway-Ninebot, which manufacturers a large range of micromobility vehicles and delivery bots. For Swobbee, the cooperation with the Chinese-American company opens up a “huge market”, as Thomas Duscha, CEO and co-founder of Swobbee, said about the collaboration at the time.

Swobbee is also collaborating with the German firms Akku Vision and AES. Akku Vision is a manufacturer of high-quality e-bike batteries founded in 2011 in Franconia, which are sold under the own brand E-Bike-Vision. The batteries are compatible with drive systems from Bosch, Yamaha, Panasonic and Gazelle. AES, in turn, is a manufacturer of lithium iron phosphate batteries based in Glinde near Hamburg. For eight years now, the company has been equipping Deutsche Post’s e-bikes with LiFePO4 batteries developed in-house. AES manufactures both its own and customised battery systems for a wide variety of e-bike and cargo bike applications.

Batteries from GreenPack, Okai, Torrot and Kumpan, which are used in e-bikes, electric moped scooters and electric kick scooters, can already be exchanged at the Swobbee’s battery swapping stations. Tobias Breyer, CMO and co-founder of Swobbee says these partnerships assist “our goal of making Swobbee the central filling station for micro-mobility and establishing a dense network of charging and exchange stations in urban areas”.

Now, Swobbe says that as a strategic investor and partner, EIT InnoEnergy, complements Swobbee’s growing ecosystem. “We are very pleased to have such a renowned, globally active partner at our side with EIT InnoEnergy. This is not only a confirmation that we are on the right track, but also the starting point to be able to take further investors on board as we now start to scale,” explains Duscha.

Duscha told TechCrunch that this Series A brings Swobbee up to a pre-money valuation of about 30 million euros, or about $33 million. Later on this year, the Swobbee is aiming to raise an A+ round in the double digits. In this future round, the Berliner startup intends to bring on another strategic partner, such as a large-scale, pan-European utility company or even, as TechCrunch writes, a vehicle manufacturer from the east with ambitions to expand into new markets.