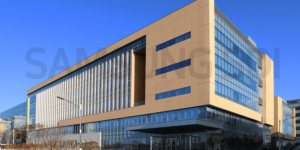 The South Korean battery cell manufacturer Samsung SDI has started building a pilot line for solid-state batteries. Samsung SDI is planning plants and systems for the production of cathodes and solid electrolytes as well as the introduction of new production processes there.

The so-called ‘S-Line’ at Samsung SDI’s research and development centre in the South Korean city of Suwon will be about 6,500 square metres in size. Suwon is located south of the capital Seoul. With the pilot production, Samsung SDI says it wants to achieve “market-leading research results and production technologies for solid-state batteries”. Samsung SDI does not provide further information, such as the production capacity or the planned start-up of the plant.

The company does not provide any information on the development status of its solid-state batteries in the short announcement – now that the construction of the pilot production has begun, the developers seem to be confident that the technology is ready for this step. In March 2020, Samsung SDI had presented a solid-state cell in the prototype stage. According to claims at the time, the cell was expected to be capable of up to 800 kilometres of range and 1,000 cycles in an electric car.

Yoon-Ho Choi, President and CEO of Samsung SDI, said according to his company’s press release that the new S-line would be the “springboard” to make Samsung SDI the true No. 1 company through “technological competitiveness, superior quality and qualitative growth”.

Important customers in the automotive sector include BMW and Stellantis, but there are also links to the VW Group. In the summer of 2021, there were reports that Samsung SDI would become one of the suppliers for Volkswagen’s unit cell.