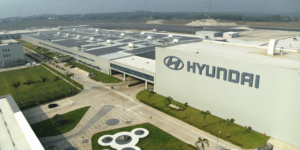 Hyundai has opened its first vehicle plant in Indonesia. The factory in Cikarang is the first Hyundai plant in Southeast Asia to also produce battery-electric vehicles. The first EV produced there will initially be the Ioniq 5, with a battery cell factory to follow.

The vehicle plant in Cikarang is located 40 kilometres east of the capital Jakarta and will initially offer an annual production capacity of up to 150,000 vehicles, according to the Korean carmaker. Hyundai says it plans to increase the plant’s production capacity to 250,000 units a year. This will require an investment of another 1.55 billion dollars (1.4 billion euros).

The plant will act as a production hub for Southeast Asia, building not only but increasingly electric cars – starting with the E-GMP model Ioniq 5, which is now being built outside South Korea for the first time.

“This plant will play a key role in the automotive industry and specifically in the field of electric vehicles,” says Euisun Chung, Executive Chair of Hyundai Motor Group. “Moreover, Hyundai will keep contributing to the establishment of the electric vehicle ecosystem in Indonesia through the battery cell plant currently under construction. This will further help support Indonesia to play an important role in the global landscape. We hope Hyundai’s future technologies will be the foundation of greater collaboration with Indonesia.”

Hyundai is also working with LG Energy Solutions to build a battery cell plant in Karawang, Indonesia, which is expected to be completed in the first half of 2023 and begin production in 2024.

Indonesian President Joko Widodo also attended the opening – according to him, the Ioniq 5 is the first Indonesian-made electric car. “I hope that this IONIQ 5 from Hyundai will become an important milestone in the development of Indonesia’s electric vehicle ecosystem, and to further accelerate the electric car ecosystem that is more advance,” Widodo said.

Indonesia is one of the most important nickel producers (about a quarter of the global deposits are located there) and wants to build a manufacturing industry based on this – with batteries and electric cars. In recent years, international manufacturers have been lured to the country again and again.

BMW presents additional data for the i7