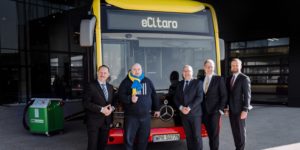 The Polish city of Wroclaw has ordered eleven Mercedes-Benz eCitaro G. The all-electric electric articulated buses are to be delivered to the city’s transport operator in the third quarter of 2023.

The eleven eCitaro G are reportedly equipped with second-generation nickel-manganese-cobalt (NMC) batteries with 396 kWh that feed the electric motors. The vehicles will be charged via a pantograph both in the depot and on the lines.

They are equipped with an intelligent thermal management system that has a significant positive influence on the range. This includes the automatic temperature control system for the vehicle interior as well as the battery temperature management. The vehicles are air-conditioned via a CO2 heat pump.

Last year, the Polish port city of Gdynia had already ordered 24 units of the Mercedes-Benz eCitaro (eight articulated and 16 solo buses). The order, placed in June 2021, was Daimler’s first order for fully electric city buses from the neighbouring country.

The eCitaro G celebrated its official world premiere in September 2020. “Under favourable conditions”, a range of up to 220 kilometres should be possible with the vehicle, it was said at the time. The vehicle is optionally available with solid-state batteries supplied by the French company Blue Solutions.