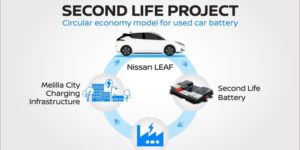 In Spanish city of Melilla in North Africa, Nissan has teamed up with energy company Enel for a project on the second-life use of electric car batteries. Old batteries from Nissan electric cars have been integrated into a stationary storage system to improve grid stability.

The storage system was installed at a conventionally operated power plant belonging to Enel subsidiary Endesa. It consists of 48 used Leaf batteries and 30 new battery packs. The storage is designed as a backup generator to prevent interruption of the power supply in case of excessive load.

The storage unit has an energy content of 1.7 MWh and a maximum output of four megawatts. This means that the storage facility can supply Melilla’s power grid with energy for up to 15 minutes. According to Nissan, that is long enough to reset and restart the power plant’s systems.

A secure power supply and high grid stability is very important in Melilla. Since the city of 90,000 inhabitants is a Spanish enclave in North Africa, and Melilla’s only national border is with Morocco. The city is isolated from the Spanish electricity grid and relies on its own power supply.

“The collaboration with Enel allowed us to create a model for a battery’s second life, which can be applied in many other use cases,” says Soufiane Elkhomri, Director of Energy Services for the Nissan AMIEO (Africa, Middle East, India, Europe and Oceania) region. “This is a great example of the endless possibilities that come with reusing electric vehicle batteries as part of a circular economy.”

Salvatore Bernabei, CEO of Enel Green Power, added: “The development of storage technology is key if we want to foster greater renewable penetration in our energy systems, so we can truly shape the power generation of the future.”