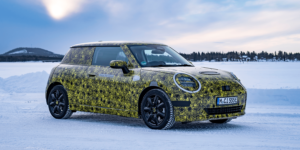 Mini is currently testing the new generation of its three-door car with pure electric drive in Arjeplog, Sweden. Not only the driving behaviour is being tested, but the components of the electric drive system as well. Additionally, the BMW brand has announced that a concept will be presented later this year.

The fifth generation of the Mini is “geared towards purely electric driving pleasure right from the start”, as BMW states. “MINI is on a path of growth and heading towards a fully electric future,” says Stefanie Wurst, new head of the Mini brand since February. “Our iconic MINI 3-door, maximises the experience for our customers through its electrified go-kart feeling combined with digitalised touchpoints – and a clear focus on sustainability with a minimal environmental footprint.”

However, the winter tests at BMW’s Arjeplog test centre in Sweden are not just about fine-tuning the chassis to achieve the aforementioned go-kart feeling even on slippery surfaces. In extreme minus temperatures, the electric drive, high-voltage battery, power electronics and charging technology were tested. In the press release, Mini is satisfied with the results, saying that the prototypes have “already demonstrated their high degree of maturity”.

Of course, the Munich-based company does not mention exact data and figures in the press release; the technical data will not be published until the premiere of the fifth generation of the Mini – according to the British magazine Autocar, there will even be a choice between two e-drives. What is clear, however, is that while the electric drive of the BMW i3 was integrated into the current generation as an afterthought, the electric drive with its requirements was part of the specifications for the new model from the very beginning – even if the model will continue to be available as a combustion engine.

The Mini Countryman will also have a successor, in this case the third generation. This will also be built as an electric model at the BMW plant in Leipzig parallel to the X1 (and iX1). For the latter, BMW recently announced a preliminary WLTP range of 413-438 kilometres; something similar could apply to the Countryman.

But the Countryman will not be the only Mini model with light SUV leanings: Later this year, Mini also plans to present a concept of a crossover model for the premium segment of small cars – according to rumours, this could be a new edition of the Paceman. Other Mini variants – such as the five-door model and the convertible – will probably only be available as petrol models.

Nissan to focus on electric vehicles in Europe