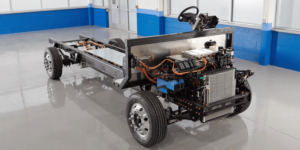 Proterra has won another customer for its battery systems. US vehicle manufacturer The Shyft Group will equip its Blue Arc electric delivery transporters with batteries from Proterra.

Proterra’s H-Series battery system will be placed between the truck’s frame rails and is expected to give the electric delivery van an approximate range of 150 to 175 miles – roughly between 240 and 280 kilometres. There is also the option to increase the range by adding more batteries.

According to the company, Proterra’s battery systems have been proven in more than 25 million operational miles of Proterra transit vehicles. They are developed and manufactured in the United States. In December 2021, Proterra announced plans to build another manufacturing facility for battery systems for use in electric vehicles. The new plant will be built in Greer, South Carolina, near Proterra’s electric bus manufacturing facility in Greenville, and is expected to be operational in the second half of 2022.

Production of the first Blue Arc vans is scheduled to begin in mid-2023. The Class 3 vehicle is designed for high-volume, last-mile delivery fleets.