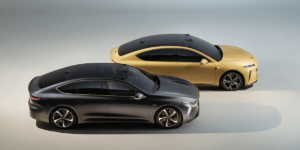 The Chinese electric car manufacturer Nio has presented its preliminary business figures for 2021. Annual sales amounted to approximately 36.1 billion yuan (5.2 billion euros), an increase of 122.3 per cent compared to the previous year. The company was also able to reduce its losses.

In terms of revenue, Nio achieved exactly the same ratio in Q4 as it did in terms of shipments: The 9.9 billion yuan is equivalent to 27.4 per cent of annual sales. So Nio did not deliver a conspicuous number of expensive or low-priced vehicles in the fourth quarter but kept its level in the model mix constant.

While the company was able to reduce both the net loss and the loss from operations for the year, the final quarter showed a contrary development here: Ner net loss was 2.14 billion yuan (310 million euros) in Q4, an increase of 156 per cent compared to Q3. In other words, over 53 per cent of the total net loss of 4.0 billion yuan was incurred only in the fourth quarter.

Unlike previous announcements on financial figures, Nio no longer warns of doubts about its own continued existence. In fact, as of 31 December 2021, cash, restricted cash and short-term investments stood at 55.4 billion yuan, or the equivalent of 7.93 billion euros.