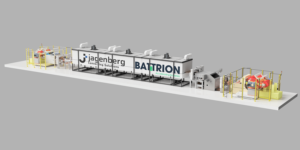 Jagenberg’s electrode coating lines, which feature Aligned Graphite technology, enable the production of negative electrodes (anodes) with extremely low resistance and controlled orientation of the graphite particles. The company says these electrodes are suitable for next-generation fast-charging lithium-ion batteries. According to Battrion, the production lines can be delivered as turnkey plants that are fully integrated into the state-of-the-art GWh battery production environment.

Battrion is pushing its battery technology against a backdrop of rising demand in the face of mass adoption of electric cars. For example, the Swiss battery technology provider has also developed the Aligned Graphite technology for the mass production of fast-charging lithium-ion batteries. The company says that improving the microstructure of the negative electrodes can reduce the charging time of lithium-ion batteries by up to 50 per cent.

Battrion has set up small-scale production for battery electrodes with a capacity of 20 MWh per year in Dübendorf, Switzerland, where it has also started production for customers from the automotive industry. The Aligned Graphite technology is already in use there. Even then, it was clear that small series production on site was not to be the only option. Battrion announced that the next step would be to make its technology suitable for production in the GWh range, which has now apparently been achieved.

In July 2020, Battrion and the construction technology group Hilti announced battery cell prototypes that were based on this novel technology. According to the two companies, the cells had up to 20 per cent higher discharge performance in electrical appliances than conventional cells. In other cell designs and application areas, the battery cells even showed an increase in discharge performance of up to 40 per cent and a reduction in charging time of up to 50 per cent thanks to the new technology. A side effect is that even with a higher charging and discharging performance, the heat development should not increase, which protects the cells or does not put them under additional strain.