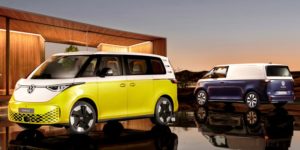 VW Commercial Vehicles is aiming for a sales share of battery-electric vehicles of more than 55 per cent in Europe by 2030. Not only the currently announced model series such as the ID. Buzz and the e-Crafter, but also new models with electric drive.

This sales target is part of the further developed ‘Grip 2030’ strategy, details of which were presented for the first time at the annual press conference. “By 2030, more than 55 per cent of our vehicles in Europe will be battery-electric vehicles powered by ‘green’ electricity,” says VWN CEO, Carsten Intra. With the specification on BEVs, plug-in hybrids and fuel cell vehicles are therefore not included in the 55 per cent.

Further measures of the strategy mainly concern the business area “AD/MaaS/TaaS”, which combines the activities around autonomous driving as well as MaaS/TaaS services. Services are currently planned in more than 50 cities worldwide.

Final preparations are underway at the Hanover plant for series production of the new ID. Buzz. This includes the qualification of more than 5,000 employees for the construction of electric vehicles. Around 60 per cent of the employees have completed the qualification so far, and the remaining 40 per cent should have completed it by the start of production. At the same time, the first conversion measures for future fully electric premium vehicles of the Audi and Bentley brands have already begun. A new production hall is being built in the heart of the factory for this purpose.

At the same time, the first conversion measures for future fully electric premium vehicles of the Audi and Bentley brands have already started. A new production hall is being built in the heart of the factory for this purpose.

VW Commercial Vehicles wants to develop further fully electric cars. Beyond the ID.Buzz and the electric version of the Crafter delivery van, the Amarok pick-up, which is being continued together with Ford, could be a candidate – the model is to be presented in the summer of 2022. More details on a possible electric version of the pickup have not yet been determined, however. The electric camper-mobile ID. California will come after 2025.

The remaining 45 per cent of sales in 2030 will include plug-in hybrids as well as pure combustion vehicles – but the exact shares are not mentioned. In the short term, however, it will be difficult to get another PHEV from VWN: Volkswagen Commercial Vehicles has put a stop to orders for the VW T7 Multivan eHybrid, which was introduced last year. The reason is the long delivery times, which already extend well into next year. At present, delivery times are around 12 months, according to Lars Krause, board member for sales. It is not clear when new orders will be accepted.

VW Commercial Vehicles is starting series production of the cargo version of the all-electric ID. Buzz, according to a recent announcement by the company. The five-seater version is to follow at the end of May.

Nikola kicks off production of the Tre

Scania sends electric trucks to LKAB mine in Sweden