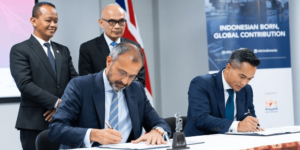 Budding British battery cell manufacturer Britishvolt has agreed to set up a joint venture with VKTR, part of the Indonesian conglomerate Bakrie & Brothers. A memorandum of understanding initially provides for the construction of a nickel sulphate plant in Indonesia.

The business plan will initially and primarily focus on upstream supply security for nickel up to sulphate conversion, the press release says. In doing so, VKTR is expected to secure the share of nickel supplies for Britishvolt in terms of tonnage and timing. This is expected to be confirmed within the next five months.

Indonesia is reportedly the largest nickel producing country in the world. “Indonesia has enormous, unprecedented potential that will see global investment flow into the country as it aims to become a world leader on the international battery stage,” says Orral Nadjari, CEO and founder of Britishvolt.

The partners are also considering a battery ‘gigafactory’ in Indonesia – and possibly other locations. A study to follow the agreement will explore the potential for development. A key focus will be to find out how embedded carbon can be removed from the supply chain. Britishvolt has set a target to reduce the carbon content of its battery production from a global average of 93kg/KWh to 25kg/KWh.

In August last year, Britishvolt signed a long-term cobalt supply agreement with Glencore. As part of the deal, the commodities group is also investing in the budding battery cell maker. Glencore also reportedly formed a joint venture with Britishvolt a few weeks ago to recycle batteries. The partners are planning a recycling plant at Glencore’s Britannia Refined Metals in Northfleet, England.