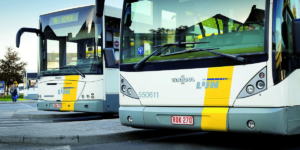 The Board of Directors at De Lijn has agreed to procure up to 1,250 electric buses to take up service in Flanders over the next six years. The new tenders include zero-emission vehicles, from midi-buses over city buses to extra-long double bendy buses and run parallel to another tender issued last year.

De Lijn, in December 2021, had ordered 60 electric buses from Van Hool and VDL. Delivery is expected later this year, and the Flemish company approved a tender for 350 e-buses from said suppliers in June 2021. The contracts were worth between 190 and 230 million euros.

In the new procurement process, De Lijn has opted explicitly for two additional framework agreements. Until now, there has only been a maximum number per bus size. However, how many buses the company will procure in each lot now depends on technological developments during the six-year procurement period.

The two largest lots comprise the two bus sizes most commonly used in public transport, i.e. twelve-meter solo buses and 18-meter bendy buses. De Lijn set a cap of 500 units in each class. In addition, De Lijn is ready to procure a maximum of 75 vehicles no longer than ten metres in the city bus segment. Another lot holds space for another 75 e-buses (max) at a length of 18 metres with high passenger capacity and 75 buses with 24 meters – i.e. double articulated buses.

The second framework comprises only 25 vehicles, these being the midibuses above with a length of around eight meters. De Lijn will procure these vehicles in a separate tender, as the schedule is tight: orders are to be placed this year for the buses to go into service in Bruges next summer.

De Lijn is a company of the regional government in Flanders that provides public transport by bus and tram in this region of Belgium. The De Lijn network has about 1,000 lines and 36,000 stops, and Flanders says 3.5 million people use De Lijn’s services one or more times a year.

At the same time, “65 per cent of all trips are made by car,” said Lydia Peeters, Flemish Minister for Mobility and Public Works. According to Peeters, that number needs to be reduced. “We need to go green in all sectors. Cars, vans, trucks, but also the electrification of the De Lijn fleet is an important link.”

Indeed, Flanders and De Lijn have been working on electrification for some time. Flanders in coordination with De Lijn only this March has issued a policy that grants operators up to 22,000 euros per zero-emission bus. The company’s Director General, Ann Schoubs, at the time said, De Lijn was “first and foremost focusing on the electrification of our own fleet.” She added the target to have the entire fleet emission-free by 2035.

Since the new Flemish government took office in 2019, Peeters has been working hard towards a zero-emission fleet and was pushing De Lijn to introduce it sooner. However, the goal envisaged in the Flemish coalition agreement of using only zero-emission buses in the cities as early as 2025 was abandoned. Schoubs had told Parliament’s mobility committee that this goal was “unrealistic”.

Today’s communication makes no specific reference to the funding announced earlier this month, but a connection is likely.