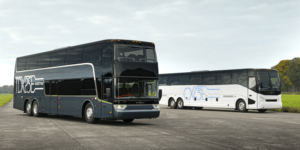 In the Flemish region of Belgium, bus operators may now claim 21,700 euros a year when replacing diesel buses with zero-emission models. Flanders’ government, together with the Federation of Belgian Coach and Bus Operators (FBAA) and De Lijn, have made concrete agreements.

The new funding deal is part of the Flemish Climate Plan. The partners estimate the subsidy would add 300 electric buses in Flanders in the next three years and reduce CO2 emissions by 50,000 tonnes.

Operators can receive an annual sum of up to 21,700 euros when replacing a diesel bus with a battery-electric or fuel cell bus under the current contracts. The statement is unclear whether this is a capped sum or per bus model. However, looking at the fleet target, funding is likely per model.

Said partners include operator De Lijn. In today’s statement, the company’s Director General, Ann Schoubs, said De Lijn was “First and foremost focusing on the electrification of our own fleet.”

The company in December last year had ordered 60 electric buses from Van Hool and VDL as reported. Delivery is expected later this year, and De Lijn approved a framework agreement for 350 e-buses from said suppliers in June 2021. The tender was said to be worth between 190 and 230 million euros.

“De Lijn is determined to make its entire fleet emission-free by 2035,” said Schoubs at the time.

At the same time, since the new Flemish government took office in 2019, Peeters has been working hard towards a zero-emission fleet and was pushing De Lijn to introduce it sooner. In 2020, she allocated €93 million of her EU COVID recovery budget towards a greener fleet, mainly for electric buses and their charging infrastructure.

However, the goal envisaged in the Flemish coalition agreement of using only zero-emission buses in cities as early as 2025 had been abandoned following consultations with De Lijn last year. Schoubs had told the Parliaments’ mobility committee that said the target was “unrealistic”. Regardless, in January last year, De Lijn said they would procure up to 970 e-buses in the short term.

The 300 e-buses now envisioned for 2025 are thus well in line or, say, a compromise with De Lijn’s initial planning.