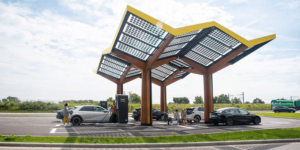 The new contract will see Fastned develop and operate 18 new fast-charging stations along key private motorways in the north of France. Each site will host four to 18 charge points delivering up to 300kW, enough so Fastned for drivers to add up to 300 km of range in 15 minutes.

The Dutch company aims to open the stations this year, spread across four regions: Ile-de-France, Grand-Est, Hauts-de-France and Normandy.

Once the new 18 charge hubs are open, Fastned will operate 31 locations in France since it now has won three major tenders to install charging infrastructure on private French motorways. The first tender in November 2020 included nine locations on the APRR network near Paris. Eight stations are operational now, according to Fastned. Earlier this year, the company reportedly won another four locations in the south of France on the ASF/Vinci motorway network.

Arnaud Quémard, Managing Director of Sanef, said Fastned was helping the Group to accelerate “the massive deployment of ultra-fast charging stations and thus meeting our ambition of equipping 100% of the service areas on our networks by the end of the year.”

This is in line with a goal set by the French Government. All three tenders are part of the Ministry of Ecological Transition’s push to equip all 360 private motorway service areas with charging infrastructure by the end of 2022. As a result, ASF and APRR/AREA and service station operators VINCI and SANEF and their subsidiaries have opened tenders for fast-charging hubs.

According to the Dutch company, half of the tenders have been opened until now, with Fastned responding to “practically all of them”. The results of the remaining tenders will be made public in the coming months.

Based in Amsterdam, the company claims it has now built 197 fast-charging stations in the Netherlands, Germany, the United Kingdom, Belgium, France and Switzerland. Fastned is listed on Euronext Amsterdam (ticker AMS: FAST).

UK: 50,000 EV chargers to be installed at schools and universities