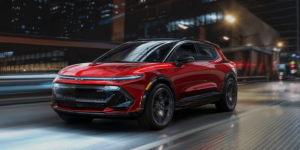 General Motors has begun converting its plant in Ramos Arizpe, Mexico, for the production of electric cars. For the conversions, production of the Chevrolet Blazer and Equinox combustion models previously produced there will be discontinued until mid-May.

GM had announced last year that it would invest one billion US dollars in the expansion of this plant. Initially, battery packs and electric motors are to be assembled there and, from 2023, electric cars as well. While the assembly of battery packs and electric motors is planned in the expansion building, the existing production lines will be converted for the electric car production. However, the production of combustion cars will continue in the old part of the factory for the time being.

Six weeks are planned for the conversion, during which no cars will be built. During this time, new production machines and robots will be installed to modernise production. In the week beginning 16 May, production of the combustion engines is to start again. It is not known when the first electric pre-series models will be sent down the production lines.

Which electric models GM wants to build in Ramos Arizpe has not yet been officially confirmed. However, it is considered very likely that it will be an electric Equinox. In January, General Motors had published several renderings of the Equinox EV at CES as a preview of a production model. The compact SUV is expected to hit the market in autumn 2023 at prices starting at around 30,000 US dollars. GM also announced a Blazer EV for spring 2023. So both models built so far in Ramos Arizpe are to receive electric versions, which are to be launched in exactly the same year in which the first electric cars are to be built in the Mexican plant.

During the production break, however, the employees will not be sent on forced leave, but will be deployed elsewhere. They are to maintain equipment in other areas of production and there is to be training “in certain key areas of production” – possibly affecting the current engine and transmission plant in preparation for e-motor production.

Ramos Arizpe is the fifth GM plant where the company is building or plans to build electric cars. Two of these plants are located in Michigan (Orion for the Bolt, Bolt EUV and in future the Chevrolet Silverado EV as well as Factory Zero in Detroit-Hamtramck for the GMC Hummer EV), one in Tennessee (Spring Hill, among others for the Cadillac Lyriq) as well as a plant in Ontario, Canada – for electric transporters.

Toyota prepares for the European launch of the bZ4X