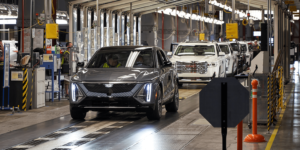 Cadillac has started series production of its first electric model Lyriq in the USA at GM’s Spring Hill assembly plant in the state of Tennessee. Currently, however, the electric SUV can no longer be ordered, as new orders will not be accepted until 19 May.

GM President Mark Reuss also attended the ceremony in Tennessee, calling it a “monumental day for the entire GM team.” “We retooled Spring Hill Assembly with the best, most advanced technology in the world and the team worked tirelessly to complete the preparations nine months ahead of the original schedule,” Reuss said. The Lyriq sets the standard for Cadillac’s future, he added.

Reservations for the ‘Debut Edition’ of the Cadillac Lyriq sold out in just over ten minutes in late summer 2021. Those orders are now being processed. Cadillac will not take additional orders for the Lyriq until 19 May 2022. Reports from February also show that demand is high: at the time, Reuters wrote, citing suppliers, that GM now plans to build 25,000 units of the electric SUV this year instead of 3,200 Lyriqs.

In China, Cadillac had already started pre-selling the Lyriq in November 2021. The model will be produced there by the GM-SAIC joint venture.

Cadillac has announced the 2023 Lyriq will start at $62,990 when orders in the U.S. open on May 19th. Cadillac also announced a special charging offer. Lyriq RWD deliveries are expected starting in Autumn this year. Deliveries of the 2023 Lyriq Debut Edition, which was available through reservation only, will begin this summer.

“These are important steps for Cadillac, as we make good on our promise to deliver an EV offering more than 300 miles of range and move toward an all-electric portfolio by 2030,” said Global Cadillac Vice President Rory Harvey. “Cadillac will define the future of luxury transportation through its range of forthcoming EVs, and it all begins with LYRIQ.”

The LYRIQ RWD version offers an EPA-estimated 312 miles of range on a full charge and starts at $62,9902. The AWD model will start at $64,990, however, the range will not be announced until closer to the market launch of the vehicle.